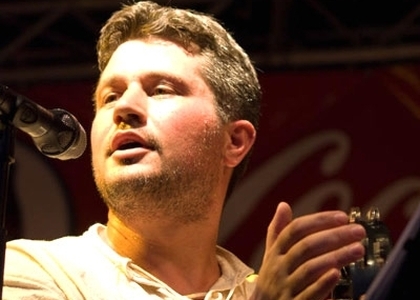 The First National Tour of the Anton Pann Ensemble

Tuesday, 16th June, 2015, is the beginning of the first national tour of the Anton Pann Ensemble, which was initiated by The Anton Pann Association for Culture and Traditions. The tour is called The Unicorn - A Journey through Our History. On this tour the ensemble proposes the audience a series of works that are representative for the cultural background of our country, belonging to the period between the 16th and the 19th century. The music in the manuscripts will be combined with old Romanian literature, Ottoman lyrics, Ebru water painting and video-art, all of which will be bound to one another through the common elements that are Dimitrie Cantemir and Anton Pann. Constantin Răileanu, a member of the ensemble, talked to us about this series.

What works do you propose to the audience during this tour?

The tour is called The Unicorn and it is a journey through our national history. It actually represents a cultural manifesto, an alarm signal, if you'd like, that we are ringing for the great audiences in our attempt to prove through a multimedia performance of music, poetry and video projections, that a country's real culture is the one that defines it, and that replacing this culture with kitsch elements or, on the contrary, placing any sort of cultural events outside society's limitations, is a major loss leading to the final result of losing the country's own identity. Through this tour, we are trying to prove that we do have cultural values, and we are trying to promote them within the current context of the European Union, an international, multicultural context, and we're also trying to show that we have great personalities in our culture - such as, Dimitrie Cantemir and Anton Pann - and we have to shed light upon them. Both of them are well-known cultural figures and our duty is to promote them and not to let them perish into forgetfulness, as it unfortunately happened up to this point. There is a great deal of information and also a lot of documents waiting to be brought to attention, but the effort of presenting them only in a closed and academic environment is in vain. We have to find a way towards greater audiences, and the best way of promoting the information that we came upon during our research of the manuscripts is the artistic form.

You've already mentioned combining music with other arts. What is the reason behind this choice?

Culture is not in fact only about music or only about poetry or only about painting. On the contrary, culture contains all of these art forms, all of which have to be combined together in order for a beautiful result to be obtained. A concert could awake certain feelings, but when it is accompanied by images and speeches, the piece of information that you are trying to share with the audience of that concert will be more easily comprehended. We kindly expect all of you to be with the Anton Pann Ensemble during this tour called Unicorn - A Journey Through Our History to enjoy the music of past centuries and also the old lyrics and poetry from the boyars' and rulers' houses, and at the same time to enjoy the images, paintings and works of famous Romanian artists, in order for this cultural event to be as enjoyable for you as it is for us. We therefore invite you to join us during all of the concerts in your city.