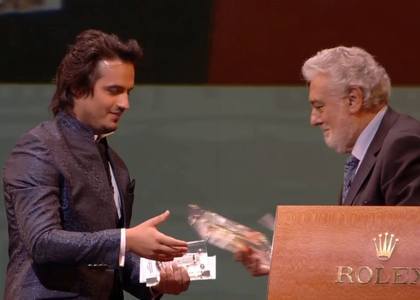 The Tenor Ioan Hotea is the Winner of the Operalia Competition, Held in London This Year

Monday, 20 July 2015 , ora 15.25
The tenor Ioan Hotea is the winner of this year's edition of The Operalia World Opera Competition, which was established and supervised by the famous tenor Plácido Domingo. The competition was held at the Royal Opera House in London for the first time. Ioan Hotea was awarded the 1st Prize in the Male Section, as well as the Zarzuela Prize, after performing an aria from Gaetano Donizetti's The Daughter of the Regiment.

Ioan Hotea is the winner of Operalia, one of the most prestigious opera competitions, founded by the famous tenor Plácido Domingo. How do you feel and what does this triumph mean to you ?

It was an extraordinary evening for performing on stage at one of the most prestigious opera houses in the whole world, and especially under the baton of the maestro Domingo, who is an idol to all the singers. To perform while being conducted by him is an amazing experience, especially on the stage of the Royal Opera House. It was an extraordinary evening. The Zarzuela Prize was unexpected, it's been a long time since a male won it.

Which were the most difficult moments during the competition ?

I think that the first part was very important, because it is then when we perform two arias and a zarzuela, one of which is chosen by us and the other one by the jury. They were able to evaluate each one of us from the very beginning. The other parts were maybe equally important, of course, but the first one was decisive.

What was the general level of the competition ?

I was amazed. And not only by those who were chosen for the Final Round - the level was very high - I listened to a wide range of extremely good voices, soprano voices, very beautiful ones, in Wagner's style, very good American baritones - it was really difficult for me to choose between two baritones, I couldn't figure out which one I liked more... I think that it was very difficult for the jury to choose a winner and I feel extraordinary for having been awarded the 1st Prize in the Male Section.

Speaking of the jury. What was their reaction? I assume you had the chance to talk to them...

They were very impressed and they even decided to invite me to participate in their future projects, and from now on I'll have to be very careful aboutthe repertoire I will be required to perform and I will focus on in the following years. I have performed a vast repertoire up to this point, but from now on I must focus on a particular one.

Winning this competition implies a greater opening towards opera theatres. What are your future projects ?

The members of the jury were directors of the most important theatres in the world. I think they will open a lot of doors to me. A lot of them have already happened ... but I will have to wait and see... my schedule is already busy enough. I signed a contract in Wiesbaden for the following two stagings. I also have a schedule there, I don't want to overcrowd it, but I will still have to sign one more contract or two when I have some spare time; and I want it to be something that best suits me vocally.

When are we going to see you again on a Romanian stage ?

I will be at Darclee; I will perform The Elixir of Love on the stage of the Maria Filotti Theatre in Brăila.

You have arrived to the higher peaks of success and you must have the desire as well as the need to thank certain people who supported and guided you along the way. Are you thinking about anyone in particular?

There are two very, very important persons. The first one is my Conservatory teacher, Ms. Mariana Coploș, who has been like a mother to me and supported me during my studies, both musically and emotionally. I would also like to thank my highschool teacher, of course, as he laid the foundations of my career and to whom I am extremely grateful, Mr. C. Vasile, the first teacher who opened my eyes towards the road that I am now following.