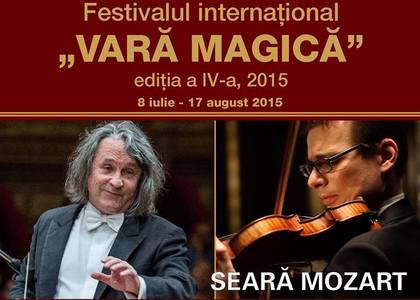 The First Concert of the 'Magic Summer' International Festival

Wednesday, 8 July 2015 , ora 9.37
The fourth edition of the "Magic Summer" International Festival, organized by the "Lanto Communication" Association, starts with a concert performed by the "Virtuosi of Bucharest" Ensemble, conducted by Horia Andreescu on Wednesday, 8th July, 2015. Violinist Alexandru Tomescu will be the soloist and the evening's programme includes musical works by Wolfgang Amadeus Mozart: the Serenade No. 13 for Strings in G major "Eine kleine Nachtmusik", K 525, the Concerto No. 4 for Violin and Orchestra in D major, KV 218 and the Symphony No. 40 in G minor, KV 550.

The concert will take place in the Grand Hall of the Romanian Athenaeum, at 19:00. Dorin Ioniță, the General Manager of the "Lanto Communication" Association, gave us an interview on this concert and this new edition of the "Magic Summer" International Festival.

The public is invited to the Romanian Athenaeum this evening, to celebrate the beginning of a "Magic Summer". What are this first concert's details?

It will be a Mozart evening, which will be spent in the company of two great artists - Horia Andreescu, who will be standing at the conductor's desk, and Alexandru Tomescu. The mentioning of the programme, of the composer's name and that of the artists is enough to recommend this concert as a good one. The "Virtuosi of Bucharest" Ensemble is celebrating its 25th anniversary. This is also one of the main reasons which made me invite the "Virtuosi of Bucharest" Ensemble to perform the opening concert of the festival. Their 25 years of activity are the definition of maturity; the members of the "Virtuosi of Bucharest" Ensemble are also members of the Romanian Philharmonic Orchestra, which the Romanian Radio National Orchestra is part of; they have reached a certain level of artistic maturity - and the fact that maestro Horia Andreescu has been the leader the ensemble ever since its foundation gives me the courage to assert that this is an ensemble which has a very high aim.

We are talking about eight events hosted at the Grand Hall of the Romanian Athenaeum, until 17th August. Who are the artists who will perform at the "Magic Summer" International Festival in 2015?