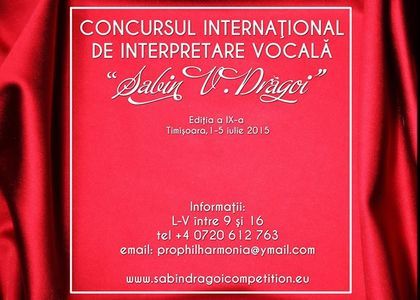 Wednesday, 1 July 2015 , ora 9.48
The ninth edition of the "Sabin V. Dragoi"International Canto Competition will make its début in Timișoara, on Wednesday, 1st July, 2015. The competition is intended to young Romanian and foreign soloists and its main objective is to promote the most valuable talents, as well as to offer the interpreters and the public a better understanding of the Romanian contemporary musical compositions, particularly the vocal compositions by Sabin V. Drăgoi, as well as the international musical compositions. We have found out further information on the competition from mezzo-soprano Aura Twarowska, who is the artistic director of the competition.

Esteemed Mrs. Aura Twarowska, the "Sabin V. Dragoi" International Canto Competition has reached its ninth edition this year. Before talking about this edition's details, I would like to ask you what particularly bounds you to this competition that here you are coordinating it this year from your position as artistic director.

A lot of things bound me to this competition. First of all, I am a graduate of the Faculty of Music within the West University of Timișoara and this competition takes place here, in Timișoara, under the aegis of the Faculty of Music. Second of all and even more importantly, I am the winner of the Grand Prize of the first edition of this competition - which took place in 1997 - when I had some very tough competitors. Many of the interpreters who participated to that edition are world-renowned soloists today. Nine editions have passed since then; I have continued walking on my own path, I have continued my career and I have ended up coordinating this competition joyfully, proudly and also very responsibly.

Winning such a competition also offers a better chance to perform on the national and international concert stages. How did the experience of winning this competition reflect in the career of the previous editions' winners, considering you are a telling example of its success?

Thank you. It is very important. This is why I am pointing out the fact that I have tried to organize its jury - starting with this edition of the competition - mostly made up of highly respected personalities from the classical music world, art critics, directors of cultural institutes and not as many bel-canto professors, in order to help the young participants find a few collaborators, to start somewhere, to take a few steps towards a future career. And, yes, indeed, … not all of them, but our most valuable participants are performing on the stages of the most important opera houses in the world today - the Wiener Staatsoper, the Metropolitan Opera House in New York, the Teatro alla Scala in Milan, the Teatro dell'Opera di Roma, the Grand Teatre del Liceu in Barcelona, the Opéra de Monte - Carlo, the Opéra National de Paris, the Royal Concertgebouw in Amsterdam, the Royal Albert Hall in London, etc. I would need two minutes only to read the list of all the operetta theatres and all the concert stages on which our laureates are performing.

What are the repertorial requirements of this year's edition of the competition?

We have the duty to promote these young artists, but, also, since this is a competition which takes place in the West of Romania, in Banat, we want to promote the musical works of the composer, whose name was attached to this competition. Of course, this competition is a reference to Sabin Drăgoi's music. To this year's competition, we added another section, a section that includes the adaptation of Sabin Drăgoi's compositions to Romanian folk music, in addition to the classical music compositions - lieder and opera arias. Also, since the competition is taking place at the "Banatul" Philharmonic Hall in Timișoara and since some of the members of the jury occupy the position of music director in some philharmonic orchestras, we compulsorily introduced a concert aria or an oratory in the competition's mandatory repertoire, in the hope of encouraging the philharmonic orchestras' musical directors to offer awards to the winners, in the form of concert performances or vocal - symphonic works.

The opera arias and the lieder belonging to the international repertoire are, also, part of the mandatory repertoire of the competition.