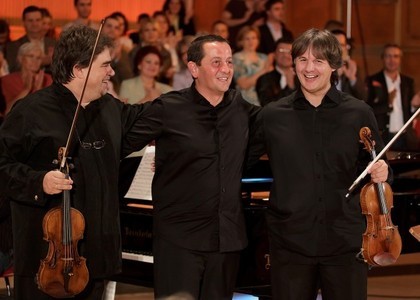 Monday, 28 September 2015 , ora 13.41
The Duel of the Violins International Tour has already become a tradition in Romania's musical life. This project is a production of Radio Romania Music organised by the Radio Romania Cultural Media Centre The fifth edition will take place on Tuesday, 22nd September, 2015. The protagonists are the violonists Liviu Prunaru andGabriel Croitoru. The judge of this music competition isthe pianist Horia Mihail, as usual. He spoke to us about this year`s edition.

Ten cities from Romania and a first performance at Chişinău. This is the schedule of this year`s edition. The first violin duel takes place today, in Piteşti. How do you begin on the 5th edition of this tour?

I begin with a lot of delight and love for the audience we are about to meet, which is in fact a great audience. I am most certain that on this 5th edition the halls will be as overcrowded as we got accustomed in the last four years. I noticed that the interest was pretty high this year as well. A lot of people around the country asked me when would a concert take place in the areas in which they live. I have to admit that I'm starting this new season on a very optimistic note with two extraordinary musicians, Gabriel Croitoru and Liviu Prunaru. I really hope that the 2015-2016 season will continue on the same note, not only for me , but for them, too. I need to point out the fact that Gabriel Croitoru and I work together a lot during the entire year. The really special event, judging strictly by how often it occurs, is meeting Liviu Prunaru. As all our listeners know, he does not live in Romania anymore, so the opportunity of having him on our concert stage is unfortunately a rare one. A few days ago, Liviu Prunaru performed as a Concert Master of the well-known Royal Concertgebouw Orchestra within the 'George Enescu' International Festival. Now he is with us and we will literally travel all over the country together. We`ve actually made a small calculation and the result was that we will travel about 248 km every day on this tour.

What will the audience hear in the concert hall? What is the music that will be performed on this tour?

It's safe to say that we returned to the type of music that we presented during the first editions, in the sense that the works chosen by the two violonists and those that we have chosen together for the second part of the concert can be easily listened to by those who are not accustomed with the concert hall. As I already said, it is really easy to listen to this sort of music, from the virtuosic works to the slower, but extremely beautiful ones. These works belong to a wide range of compositions, from baroque music to ragtime and jazz. In the second part, the audience will listen to four works for two violins and piano that were transcribed by a Russian violonist, Frolov. I'll say it again, jazz music, ragtime music, but also a set of famous Argentinian tangos that can also be found on the album that has just been released at the 'Casa Radio' Publishing House.

Do you have anything to say to those who will come to the recitals?

Our message is always conveyed on stage, and its source is in our joy of performing. But I do have a message for those who do not have the courage to enter a concert hall - I believe that this is perhaps the most fortunate occasion for them to create a connection with the great music, the music which I am very glad to perform.