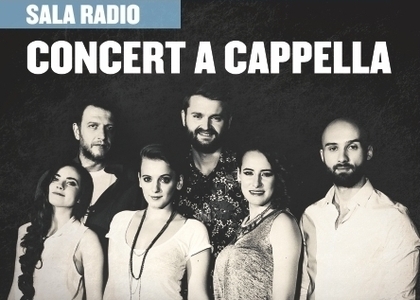 Blue Noise On Stage at the Radio Hall

Friday, 2 October 2015 , ora 10.26
Blue Noise, the a capella group that you appreciated in March, 2015 performing Love Won`t Run Away at the Eurovision National Finals, will perform tonight, 2nd October, 2015, on stage at the Radio Hall. Words, When You Wish upon a Star, Under Pressure or Dor de viaţă are only some of the songs that the audience is invited to listen to starting at 19.00. The cellist Răzvan Suma, the soloist of the Romanian Radio Orchestras and Choirs, will participate as a guest.

What does Blue Noise mean? The answer is given by Bogdan Tudor, a member of the group:

For those who don`t know us yet, I need to make a small reference; the members of our group have the greatest experience in singing a capella with other a capella groups, not necessarily classical music, but modern a capella works. Therefore, I don`t see the purpose in mentioning the names of the previous bands in which we performed; people need to know that we took all our grades in music. We've all graduated from music universities. We want to show the audience a different side of vocal music besides the other known ones in our part of Europe, such as the religious choirs or other bigger or smaller chamber choirs. Therefore, we are a band that contains six members: a soprano, a mezzo-soprano, an alto, a tenor, a beatboxer and a bass, and the music we approach is obviously frothy in most cases, because we should keep in mind that although this kind of music is similar to chamber music, this group's purpose is to entertain the audiences. Our music has to provide a delightful entertainment; we shouldn't perform it shyly, but rather relaxedly.

Our listeners will rediscover the songs they already knew, the really popular ones along the past years, which will be brought again to the audience in a very unique way for our country. That is our goal. We are working hard on this concert and its concept of giving an entertaining performance. Of course, I would like people to attend our concert without being afraid of the a capella title, they shouldn't be avoiding this type of music, because it is a unique one, and our instruments are a part of us, of our very souls.

On stage at the Radio Hall you will collaborate with the cellist Răzvan Suma. Do you have a few words to share with us about the dialogue you had with him?

Yes, of course. We are honoured to perform with him; we all know him as one of the best cello players and as a highly appreciated musician both in our country and worldwide. We wanted to perform with him, not only because he proposed it to us; I think it was his idea to perform an Argentinian tango, an important work which is probably not that popular, Le grand tango. All of us have decided to perform this work by keeping the cello score as it is, and the accompaniment is 100% a capella, including the percussion, voices, keys, the parallel and overlapped sections, among many other things. Basically, the original score is performed by us and we also included a cello. And of course we will also meet a part of the public that admires Răzvan Suma, which brings us a lot of joy. It does not frighten us, but we want to convince them that a capella music has a future, too.

We want to have an audience as great as possible in the hall, even if this is the beginning of a new season, or perhaps only its preview. Maybe the audience is still under the impression of the 'Enescu' Festival, but all music lovers are invited regardless of their preferences; all those who are always seeking and finding new aspects of music are welcomed. We will be expecting all of them, as I can't see any reason why people should not be able to make it to the Radio Hall, which is so beautiful and welcoming. Of course, Radio Romania Music and Radio Romania Culture will broadcast Blue Noise`s a capella concert.