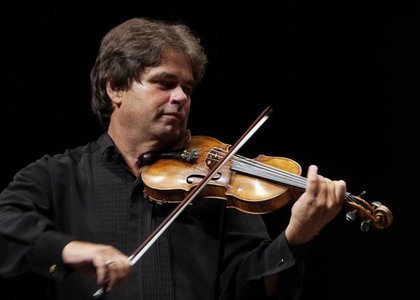 Monday, 12 October 2015 , ora 15.08
On 12th October, a new series of concerts under the title Enescu's Violin started. Gabriel Croitoru and Horia Mihail will have a journey through the high schools in Bucharest.

Violinist Gabriel Croitoru told us more about this project.

Mister Gabriel Croitoru, today is the beginning of a new tour. Where exactly will Enescu's violin arrive this time ?

This time, the tour will first arrive to the high schools in Bucharest - this is the first week of this tour and the first manifestation of this beautiful idea, which will take place every year from now on. So, we're starting in high schools and then we will perform in the Moldavian area, while the last part of the tour will take us to the southern Romania, in Oltenia.

The first visit will be to the high schools in Bucharest. I'm thinking that you had to prepare a slightly different repertoire for the students, hadn't you ?

Of course. We will hold some teaching concerts and we will also present the instruments in such a way as to bring the younger generation closer to this type of music. Actually, this is the purpose of this tour; to attract as many audience members to the concert halls.

You are experienced in teaching. How do children react to this type of music and this way of presenting it?

Most of them react extremely well. It is true that there are some disinterested children, as there always are. That's not a problem at all ! However, people's reactions were spontaneous everywhere I've been so far ... For instance, in the small villages I came across people who stood up and left after seeing what it was about; they had come out of curiosity. There were others who came out of curiosity as well and actually loved the performance. Most of them remained until the end. If at least two or three percent of them came to the concert halls, it would an extremely good thing.

How do the audience members feel about having Enescu's violin in front of them ?

Many of them want to touch it. Of course, this is not possible, because my subcontracting conditions do not allow it. But they come to see it, to take a closer look at it.When they hear it is 300-years-old, they are extremely surprised... There is also a story behind this tour. Leaving aside the performances and the stories about each composer, about each work and its origins the story related to the instrument goes on too, of course.

What other projects do you have besides this tour?

We are currently appointed to perform the 'Duel of the Violins' album abroad, for the first time. We will celebrate the national holiday of Romania in Spain. We will perform three concerts - in Madrid, Barcelona and Saragosa. After that, I will present Enescu's Violin together with Horia in Budapest, right on our national holiday, during the 'Enescu's Violin' Tour. As for the rest, I'm looking forward to the holidays.