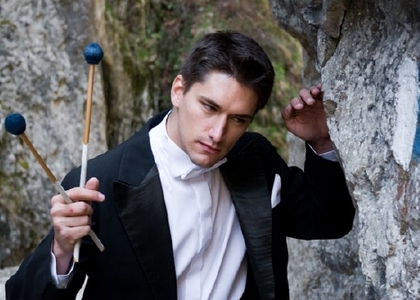 Wednesday, 14 October 2015 , ora 9.54
Alexandru Anastasiu is a young instrumentalist who stands out on the Romanian musical stages due to his interesting musical projects and transcripts of various plays for percussion instruments, which he wields with a perfect technique. One of these projects is the promotional tour of the Bach Vibes album, about which Alexandru Anastasiu talked in an interview for our radio station.

Mister Alexandru Anastasiu, you are near the end of a promotional tour for the Bach Vibes album, alongside your colleagues from Trio Grave. An interesting project with music by Bach adapted for vibraphone and low strings trio in different combinations. What works of Bach have you chosen for this album?

Firstly, the Ciaccona for solo vibraphone is recorded on this instrument for the first time. Secondly, Passacaglia is another very important work in Bach's creation, which I arranged for vibraphone and string trio - viola, cello and double bass - with my colleagues, Adrian Vasile - viola player, Mircea Marian - cello player and Daniel Dumitrana - double bass player. And, last but not least, Trio Sonata in E Minor, which I transcribed for vibraphone, viola and cello, as it was originally written for organ, same as Passacaglia, .

This is your fourth album signed by you. How did the idea of launching this album occur to you ?

I've been working on this album for ten years now, as far as I am concerned; basically since I started studying this instrument more seriously; actually, since the concerts began to be held constantly, because that was the moment when I started to take into account my ten-year-long career. Otherwise, it would have been a much longer one. This album came naturally. The 330th anniversary since the birth of the great composer and organist Johann Sebastian Bach seemed to be a great occasion to launch this album.

These works are performed in this formula for the first time. Do you think that Bach's music can be perceived differently through these transcriptions? Did you discover different aspects in Bach's music?

I could say that our interpretation is a truly novel and current one, at the same time. We're trying to bring Bach's music into a new light both through the arrangements that we have made and through our interpretation.

This makes music more accessible to the music-loving public, if we take into consideration the concerts that you held so far on this tour and the reaction of the audience.

I must say it was very well-received in Bistriţa, as well as in Cluj. I am convinced that the same will happen in Bucharest, Piteşti and Ploieşti, this being the first stage of the tour. We want to continue with other concerts in different cities; our purpose is to enrich the project with some visual cues. We have several ideas, but we won't divulge all of them now. The project will surely grow and arrive where it is well-received. Bach's music lives on !