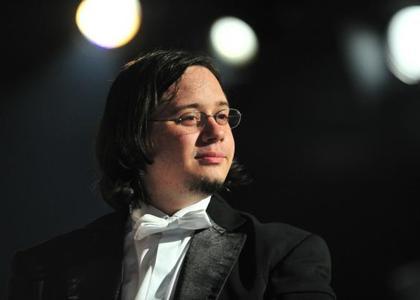 Monday, 12 October 2015 , ora 9.25
27-year-old Gabriel Bebeșelea is known as 'one of the most talented Romanian conductors of his generation'. After having been awarded with the first prize in March at the Lucerne Festival Academy in Switzerland, a masterclass competition organised with the greatest conductor of our times - Bernard Haitink - Gabriel Bebeselea had yet another victory - the first prize that he won at the International Competition of Young Conductors 'Lovro von Matačić' in Zagreb.

Gabriel Bebe
șelea, congratulations for the first prize that you won in Zagreb. I know you are between two connecting flights, so I have to thank you because you have agreed to talk to us about this competition.

This is the International Competition of Young Conductors 'Lovro von Matačić' in Zagreb, a very important historical competition in the conducting world… I am still extremely impressed by what happened last night in Zagreb. Only fourteen of the initial two hundred applicants were invited to perform with the Zagreb Philharmonic in three rounds. During the first two rounds, there were many works, such as Don Juan by Richard Strauss and Beethoven's Symphony No. 5, Symphony in D Minor by Cesar Franck; it was a huge repertoire made up of about fifteen compositions. By the final stage, we were eliminated until there were only three of us left - a Japanese performer, an American one who came from Whitside and me. A top competition that required us to have great nerves, nerves of steel, absolute cold-bloodedness and great strength of spirit.

What does the prize consist of ?

The prize consist of several contracts with many European orchestras, prize money, of course, but, most importantly, each conductor has a certain rating or number of points that accumulate in time, same as in tennis. This is a very important competition, so our rating increases.

What's next for Gabriel Bebeșelea after winning this competition ?

The first rehearsals with the State Philharmonic of Sibiu will take place in a few hours. We will perform Mahler's Symphony No. 1 in the beginning of this year's season; Next week, I'll conduct the Radio Chamber Orchestra; thereafter, I will collaborate with the Cluj-Napoca Romanian Opera and the Transylvania State Philharmonic Orchestra… Therefore, a very busy period is about to begin.