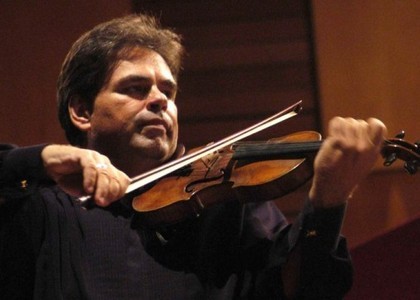 Tuesday, 3 November 2015 , ora 9.52
The fourth edition of the 'Enescu's Violin Travelling through the Romanian Villages' Tour, which was organized by Radio Romania Media Cultural Centre will end on Tuesday, 3rd November, 2015, at the 'Mihail Jora' Studio in Bucharest. Violinist Gabriel Croitoru talked to us abouth both about this year's edition and the recital tonight:

How did the fourth edition of this tour go ?

It went very well. At first, we spent a week going through the Romanian highschools; we visited five highschools in Bucharest, and the experiences that I went through on this occasion were entirely new - some of them were fruitful, other ones were not… There actually was a single one that suited the concept of an artistic manifestation to a lesser degree, but there were a few young people who showed interest in our type of music; they also said that they would come back

As for the experience around the country, this year we performed at different locations. We held concerts in many places, starting with Ardeal, in Câmpia Turzii and Viișoara, followed by a different programme, of course, in Brașov, at the Patria Hall. We went to Poiana Stampei, near Vatra Dornei, and then we held the other four performances within the tour, in Slatina, Caracal, Izbiceni and Osica de Sus, where our journey across the country ended. All concerts generated a huge impact; everyone stated that they had attended out of curiosity, after having heard about the event on every Romanian Radio frequency. They all enjoyed it a lot and asked us to come back. This was a good experience, in my opinion.

The last concert within this tour is being held today. What will the audience at the Radio Hall listen to ?

The Radio Hall will host the most 'serious' concert within the 'Enescu's Violin' Tour. We will perform Grieg's Sonata No. 3 and Brahms' Sonata No. 2, as well as Cezar Franck's Sonata for Violin and Piano, after the break.

I really hope that my invitation will not insult anyone, considering the tragedy that occured on Friday, 30th October. I hope that those who are willing to spend an hour and a half of their precious time to listen to us either live, at the Radio Hall, or on the Radio Romania frequencies will be delighted; I hope it will be a pleasant experience for everyone. Everyone is kindly invited to listen to us !

The recital held by violinist Gabriel and pianist Horia Mihail can be listened to on all Radio Romania frequencies or live streaming on the romania-muzical.ro website, starting at 19.00.