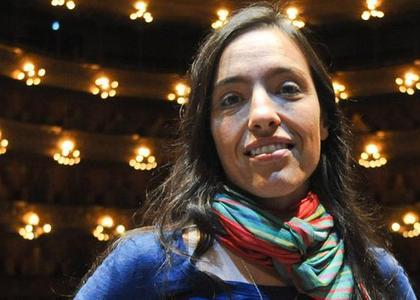 On Friday, 25th November, 2015, George Enescu's Oedipe win don new 'clothes'. During the 1958-1959 season, the Enescian work was in the spotlights of the Romanian National Opera in a set-up done by Jean Rânzescu, with the great bariton David Ohanesian taking the main role. This set-up persisted on the Bucharestian opera stage for over three decades, until 1991, when a new show was designed in the view director Cătălina Buzoianu. From 1991 up to 2011 three more set-ups have been created: Andrei Șerban's in 1995, Petrică Ionescu's in 2003 and Anda Tăbăcaru Hogea's in 2011. In the 2015-2016 season, Oedipe will know a new set-up, that of young Spanish director Valentina Carrasco. About her directoral intentions she said the following.

Thank you for accepting to talk to us about the Oedipe premiere that will take place at the Romanian National Opera. I heard that you have developed a passion for this opera.

It has been a great honor for me to be invited here to create a new set-up of this opera, I've also had another production in Brussels that was re-staged in Buenos Aires, Argentina as well. This set-up is new and it has been a great challenge for me, since the Romanian public has other standards, knows this opera, knows the directoral versions that have been on stage before. So I needed to come up with something brilliant, with a strong impact on the public and that was a big challenge.

Enescu's Oedipe is not a 'hit' like other Verdi, Donizetti, Rossini or Puccini works, how will you draw the public in to watch this new set-up?

Indeed, it is not a 'hit', but on the other hand, it's one of the most interesting stories in the history of theatre. Oedipus's is one of the oldest myths, but, on a closer look, it can become one just as modern, so it can be much more attractive than a Verdi or Donizetti work. I believe that the youth will be more drawn in by the story, by the drama of Oedipus, who decides his own fate. I think that the character's history is much more interesting compared to a subject with less essence to it such as the one of an Italian work.

I heard that the central element of this set-up is sand. Is it true?

Yes, it is. To me, sand means the lapse of time, imagine an hourglass through which we can see all of Oedipus's life, we can see the character's birth, youth, parent relationship, let's not forget that Oedipus kills his father and marries his mother, Iocasta. I think sand is the main element that signifies the lapse of time, that signifies Oedipus's destiny. On the other hand, sand can make us think of a nice, sunny beach, an interesting place, but also a place that can become filled with danger. Sand is an element that permeates everything, we find it everywhere and we can't get rid of it. It's just like Oedipus's destiny. Sand is the element that I've chosen in order to signify this myth of fate.

What was your greatest challenge in creating this set-up on the Bucharestian stage?

First of all, time was very short. Oedipe is a long work time-wise, with a big ensemble and the national opera's choir has over 90 persons involved in this production. In Oedipe, the choir is in itself a character, it's a very important presence. This was a real challenge, because it's difficult to work with an ensemble this big, but it was also a wonderful thing. I've met very flexible, receptive and cooperative people; they immediately did what I asked, working with them was a real pleasure.

What can you tell us about collaborating with the artists?

They've a got a great ensemble here. Sometimes, when you work within a theatre you have a fixed ensemble and there's a risk to it because the same ensemble has a specific repertoire, goes from one title to another and this becomes a routine, they no longer get so involved in their artistic act. I've met enthusiastic people here, I've been impressed by their talent, by how much they wanted to work and I can say that we've spent a lot of time on stage, practising. They're artists that are better trained - from a vocal standpoint as well - but I was interested more in the artistic art and they involvement was complete, I'm impressed.

Please tell us about the team as well.

When I've been called, I wanted to collaborate with a couple of young artists that knew, but they couldn't be here at this sime, so I've looked for a young designer and found Barbara del Piano, with whom I've worked very well and she made a nice team with a scenographic artist renowned in Barcelona and New York - Blanca Añon. For video projections I worked with Esterina Zarillo, with whom I've worked before in Barcelona. I think we all managed to put out a great show.