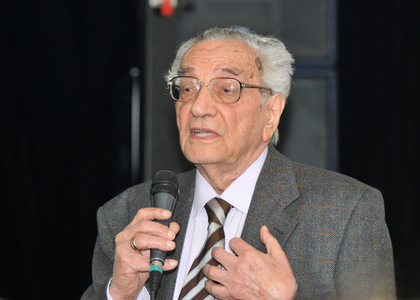 George Enescu and Bucharest's Fiddlers - Concert at the Radio Hall

Wednesday, 28 October 2015 , ora 10.17
You will be able to listen to works from the famous fiddlers' repertoire - that represented a strong inspirational source for George Enescu - at the Radio Hall on Wednesday, 28th October, during an event in which they will perform along with the Radio Chamber Orchestra and the Folk Music Radio Orchestra for the first time. Held under the title of George Enescu and Bucharest's Dynastic Fiddlers, the evening will begin with the traditional songs performed by the Folk Music Radio Orchestra and Alexandru Mica as soloist.

In the second part, the Radio Chamber Orchestra will propose some works inspired from the Romanian traditional themes, such as, Mărţişorului Circle Dance (Hora mărţişorului), Dancing Sârba Circle Dance in a cart (Sârba-n căruţă), Staccato Circle Dance (Hora staccato), Dobrică's Circle Dance (Hora lui Dobrică), Circle Dance at the Mill (Hora morii) and many others that are popular on the stages where classical music is usually performed. The soloists will be the violinist and performer Simina Croitoru and the pan-pipe player Cornel Pană, who will also conduct both orchestras. The concert will be presented by the musicologist Viorel Cosma who said the following about the event:

How long ago did you start your research on Romanian fiddler music and what tied George Enescu to this kind of music?

It all began between 1958 and 1959 when I presented a series of radio programmes entitled Important Fiddlers, on Radio Romania, which turned into a book printed by the Musical Publishing House in 1960. It had an exceptional circulation of 10,000 copies. So, I could say that my research on the music played by fiddlers is almost half a century old.

Which musicians will perform on stage of the Radio Hall this evening?

Before speaking about those who will perform this evening, I think it would be better to focus on the six Romanian musicians who are at the centre of the repertoire that you are actually going to listen to this evening. George Enescu heard about Romanian fiddlers at the age of five for the first time, when Nae Chioru' was the first fiddler whom his father had asked to teach him how to hold the violin in his hand and how to hold the bow; obviously, the fiddler was musically illiterate, so he taught George a series of Romanian folk songs and dances by ear.

The second fiddler was another great musician, the cimbalom player Lică Ștefănescu, whom George Enescu met when he was nineteen years old, exactly at the time when he was collecting his material for the first two Romanian Rhapsodies. He had a concert in Paris with a number of musicians and actors; close to the concert's end, Lică Ștefănescu performed no more no less than Liszt's Hungarian Rhapsody, which became a model and turning point for George Enescu.

The most important of them was Cristache Ciolac, from whom George Enescu collected later, not only one or ten, but forty fiddler's songs. It is a great series of fiddler's songs. He was particularly interested in the manner in which this fiddler performed these works; it was in their language that they called them: 'a fiddler's secret skills'. What exactly are these 'fiddler's secret skills'? They are: a fiddler's false trill, the glissando with one string, the portamént on a single sound, scordatura and finally, the fiddler's vibrato.

Nicu Buică followed Cristache Ciolac. Nicu Buică had been an apprentice fiddler at the poular "Iordache" restaurant situated on Covaci Street, along with Lică Ștefănescu, who used to play the cymbal. Well, Lică Buică performed a concert with George Enescu at the National Theatre in Iași on 30th May, 1918, where he performed no more no less than Beethoven's Kreutzer Sonata.

The meeting between the two, George Enescu on the piano and Nicu Buică on the violin, was extraordinary. George Enescu was so surprised by the fiddler's virtuosity that he said at the end: 'There, Buică, you are not a man, you're a devil.' And then Buică, willing to make George Enescu happy and show his love for him, wrote a romance for violin and orchestra, called Pour le Coeur (For the Heart), that is to open this evening's concert conducted by Cornel Pană at the Great Hall of the Radio.

Finally, Enescu met Grigoraș Dinicu near the end of his life; they met at the Universal Exhibition in Paris in 1937, at the Exhibition in New York in 1939 and even in 1936 when the Oedipus opera was performed in Paris for the first time, to conclude with the celebration of George Enescu's 50th and 55th anniversaries. George Enescu's collaboration with Dinicu lasted for a very long time and obviously, many of George Enescu's works from the last part of his life were a result of the connection that he had with Grigoraș Dinicu. Finally, I would like to say that George Enescu managed to catch all those 'fiddle music secrets' as fiddlers used to call them, from the meetings and collaborations he had had with them.

This evening, Alexandru Mica, the well-known singer, ethnographer and folklorist, will perform some of the most important works by Constantin Puiu, Dumitrache Ochialbi, Cristache Ciolac and Sava Pădureanu - Din Ploiești, până în Gheboaia, La Ciolpani cu crucea-naltă and Am un leu și vreau să-l beu, the latter having been sung to collect the necessary amount of money for the construction of the Romanian Athenaeum.

During the second part of the concert we will listen to Simina Croitoru, who will play a series of pieces for violin, such as, Sârba lui Pompieru and Hora lui Dobrică, namely Dobrică Marinescu, the greatest fiddler in the city of Ploiești of yore; it will all end with Grigoraș Dinicu's Hora Staccato, an internationally popular piece that was interpreted by all performers, from Jascha Heifetz to George Enescu.

It is a concert which I can sincerely call an event. I have struggled for half a century to present this programme because in the communist times I was not allowed to, as they did not want the connection between George Enescu and the fiddlers to be known; most fiddlers were obviously gypsy slaves freed after 1948 from the estates of the boyars and monasteries and that is why they did not want to expose the connection between them and George Enescu.

I shall conclude my pleading on George Enescu's activity with a motto that I managed to include in my book on fiddler music. This is what George Enescu said in an interview published in the 'Muzica'magazine in 1921, which contains articles on Romanian music: 'We need to thank them, the gypsies, for preserving our music, this treasure that only now we have come to cherish; it is only them who unearthed it, passed it forward and gave it for safekeeping from father to son, with that special care they have for what is dearest to them in this world: music.' So, dear listeners, I'll meet you at this evening's concert.