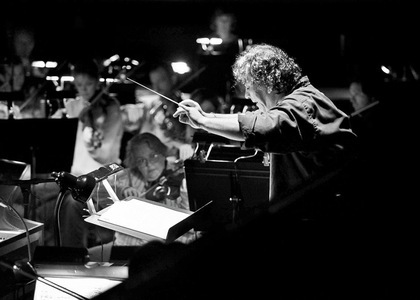 Sunday, 27 December 2015 , ora 12.41
Friday, 27th November, 2015, Romanian Radio National Orchestra invites the audience to a concert performed at Radio Concert Hall dedicated to Romania's National Day. On this event four artists from Romania or born in Romania, who enjoy a great career both in Romania and abroad, will take the stage.

On the podium, directing the performance will be Nicolae Moldoveanu who conducted orchestras such as Royal Liverpool Philharmonic, Netherlands Radio Philharmonic and BBC Orchestras. The soloists will be violinist Rafael Butaru, who is the concertmaster of the Bucharest National Opera House Orchestra and of the Romanian Youth Orchestra, pianist Rebeca Omorida, who built a brilliant concert career mainly in Great Britain, and cellist Răzvan Suma, soloist of the Romanian Radio Orchestras and Choirs, known to the whole audience in the country for his national tours such as "Do you like Bach?", "Do you like Brahms?" and "Do you like tango?". The evening's conductor, Nicolae Moldoveanu, will tell us more about the concert.

You will perform once again on the stage of Radio Concert Hall. How does the collaboration with these musicians go?

It is a great pleasure to come back to Radio Concert Hall with Romanian Radio National Orchestra. It is the second time and a relatively new collaboration but the feeling of a professional, artistic and social familiarity is already there. Rafael Butaru and Răzvan Suma have already performed together and now Rebeca Omorida joins them. In a very short time, they have managed to become a chamber team for the concert: Triple Concerto by Paul Constantinescu.

In what light do you see the work performed on this concert, a special one, dedicated to Romania's National Day?

Paul Constantinescu selects Byzantine elements specific to our culture which he then integrates into his work. He also combines Byzantine style with Western compositional style especially in regard to the contrapuntal extracts visible in his work.

What connection is between Paul Constantinescu's Triple Concerto and the other two works in the programme?

I think there is an European connection because nowadays we all want to prove that we have become an European Community from all points of view: economic, political but also cultural. The concert will begin with a work typical for the German repertoire, Carl Maria von Weber's overture of the opera Der Freischütz, one of the first German composers who approached the Romantic Opera style. This work presents kaleidoscopically the characteristics of the German Romantic style. We begin with the West European style and continue with the East European one, which is the Byzantine, and after a break, we have a combination of the two cultures. Why? Pictures at an Exhibition was composed by Mussorgsky in his Slavic style but the orchestral arrangements were made by Ravel in his French style. Mussorgsky presents music typical of Slavic Romanticism but Ravel uses French instrumentation; that means he uses the saxophone, an instrument which just appeared on the market of the 19th century. On the whole, it resembles a nut: the kernel is Slavic but the shell is French.

Now that we have talked about Romania's National Day and the upcoming concert, what does December 1st mean for you?

It means the honour of having the opportunity of taking part in this festivity because I am one of the artists who left abroad before the Revolution and in my day National Day was celebrated on 23rd August. The fact that December 1st has become the National Day is a great event in the history of Romania which also deserves to be presented and reflected in cultural activities.

We invite the audience to come and listen live to this great orchestra and to these wonderful soloists and if they have not got the possibility to be present in the Radio Concert Hall we invite them to listen to Radio România Cultural and to Radio Romania Music.