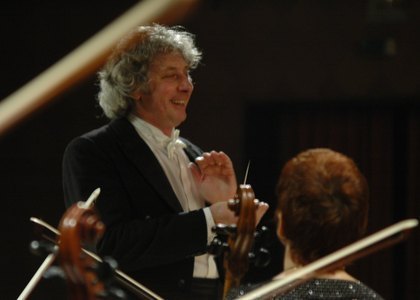 Wednesday, 9 December 2015 , ora 10.43
Bach, Beethoven and Mozart are the three titans reunited in the concert of Radio Chamber Orchestra which takes place on Wednesday, 9th December, 2015, at 19.00, at Radio Concert Hall. The event will be performed under the baton of conductor Răsvan Cernat.

Bach, Beethoven and Mozart in this evening's programme. What are the traps for musicians, conductors and orchestra in 2015 when performing such works?

From the technical point of view, the three celebrities, whom you have just mentioned, do not give so many problems to the performers. But, from the point of view of ideation and sentiment load which the performance necessitates, their works are difficult to perform. As a matter of fact, it is said that each of these three composers is the pinnacle of mastery for a performer. I did not choose them by chance. Of course, I would have liked to include Haydn and then we would have the complete set of what we call classicism nowadays.

What memories does Radio Concert Hall bring back to you?

It means very much to me because there has been a long cycle since I have started collaborating with these two great Radio Orchestras. They are prestige orchestras that have had glorious moments and carry further Romania's interpretative art. My first collaboration with this Chamber Orchestra was in 1977, a week before the earthquake, which back then was called Studio Orchestra. The first part of the concert was conducted by me while the second one by Horia Andreescu. For both, it was the first time when we performed in front of the Bucharest audience and in front of a professional orchestra such as that of the Radio.

I am glad to see that this orchestra is still of great value and I wish it stay like this and to improve itself continuously because perfection cannot be achieved. We do not have to struggle to attain perfection because there is always room for better. It is a true joy and I cannot wait to see once again the hall in which the new audience of the orchestra will be present. It is a celestial art of this Radio Concert Hall in which I always find only the audience in love with culture and art. This Concert Hall has great acoustics, ones to be envied and hard to find even in many European halls.

I wait for the audience with great excitement! I try to imagine who will be there and how will they behave in the hall. What I want to ask them and wish them is to have a number of people who want to listen to works of great composers and who come only to enjoy this divine contact.