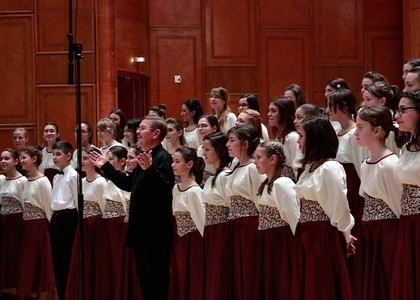 Thursday, 10 December 2015 , ora 10.38
On Saturday 12th of December 2015, starting at 19.00, the Radio Romania Ensemble, under the baton of conductor Voicu Popescu, is inviting you at the Radio Hall to an extraordinary Christmas concert. One of the most special moments of the event will be the interpretation of A Ceremony of Carols suite, signed by the British composer Benjamin Britten. The complex work reunites ten plays - with harp accompaniment - and the entire work will be performed for the first time in Romania. The event will be broadcasted afterwards through the European Broadcasting Union (EBU), within an important media project - Euroradio Special Day of Christmas Music - that will celebrate Christmas through 14 concerts proposed by the public broadcasters, broadcasted for millions of listeners. Regarding the concert, Voicu Popescu declared:

On Saturday you will perform on the stage of the Radio Hall. It is a last concert held on this scene at the end of an anniversary year. What did you prepare for the audience that will be at the Mihail Jora Studio?

We thought about a bivalent programme, a programme made of two parts. Thus, as it is supposed to be, the first part will be dedicated to the Romanian carol - beloved works, known and of course expected by the audience. They are works that we are always listening to them and singing them with heart and soul in this period. If we may say it like that, it is a wide waiting and exceptional programme, and it is our pleasure to present it due to the fact that the programme includes both plays with of a certain vivacity, energy and virtuosity, and line plays, lyrical plays full of sensitivity and with all the features that make reference to the Romanian carol - a certain spirit, a certain mood that only the Romanian carol seems to have it.

In the second part, we thought to present to the audience a work that, practically it has never been totally performed on the Radio stage. It is about 'Ceremony of Carols' by Benjamin Britten. It was sequential sang by the Children`s Radio Choir, but the entire work has not been performed, and thus, here is the moment when we can do this with the help of the harper Iuliana Roşca, as Britten asked. For the accompaniment of this work, the harp remains the most suitable for this and we hope that the presence of this instrument will bring something very special. Furthermore, at the rehearsals, I must mention that the members of the choir have been waiting very much these moments and there have been very special moments for the preparation of this event. In order to complete the second part, we decided to do it with two works made also by the English composer, John Rutter, a contemporary composer that writes a bright and sincere music. We will present 'Personent Hodie' and 'Tomorrow shall be my dancing day', after which, of course, it follows Benjamin Britten.

It is a programme, as I was already mentioning, with two facets - a classical, lyrical, beautiful, sincere, bright one and another one with a slightly austere aspect, due to the fact that both the texts and the Britten`s music are inspired from old poems and medieval music, written with the British composer`s specific language. I think that these two facets of our programme are equilibrating and offer to the audience the possibility to enjoy the beauty of holiday through the music that we propose.

The concert will be broadcasted afterwards through the European Broadcasting Union (EBU), within a project, Euroradio Special Day of Christmas Music. How did you get this news?

When I heard this, we surely had a certain concern, by trying to see if the time that we have is enough in order to prepare this type of broadcasting and I admit that it was not easy for us. Practically, we had only one month to prepare this event, because we had a busy autumn, as it may have been seen or heard - from the George Enescu Festival, where we had three performances, after which the ride to Munich, under the aegis of UER, the meeting of the two finalists within the 'Let the Peoples Sing ' contest. Immediately after our return, we had another performance also at the Radio Hall, with religious music, within the 'Pray the Lord' National Contest, and last but not least, it was important our presence at the celebration of the Academic Radio Choir, the third anniversary concert, moment where we presented both acapella moments and beautiful moments, together with the Academic Radio Choir, to which the children had to bring something special to the event. Thus, we have been practically started working for the carols programme on 11th of November.

It is pretty little for a children`s choir, but we did it with a lot of enthusiasm and we hope it will be a special moment.

We hope the audience will be with us because in these moments, we think that the choir seems to know the best how to express the beautiful feelings that we have when Christmas holidays and the New Year are approaching. It is the period when we listen with such a joy and attention to the children`s and the choir`s voice. It is the period of the year when everyone listens to this type of music and we feel that we have to offer the audience everything that we can, regarding the sensitivity and the beautiful feelings. Thus, these meetings must not be missed; everywhere we can find choral concert with must gladly go, because from this point of view it is the most beautiful moment of the year.

Come to the Radio because you will leave happier and wealthier!