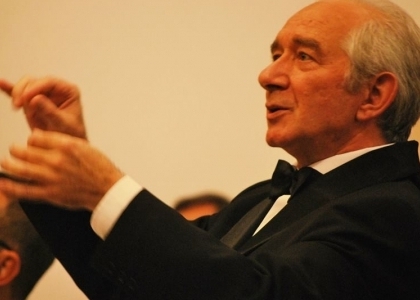 Tuesday, 15 December 2015 , ora 12.30
In 2015, 'Capella Transylvanica' Chamber Choir from 'Gheorghe Dima' Music Academy has reached sixty years since its establishment and thirty years since Cornel Groza has been in charge of it. On Monday, 14th December, in Auditorium Maximum, there has been held an anniversary concert which has illustrated the diverse repertoire of 'Cappella Transylvanica' Chamber Choir. The conductor Cornel Groza has spoken to us about the double anniversary.

What is the history of this choir? There are several important points that must be pointed out, starting from the profile and the character of the choir, which has been imprinted on by maestro Dorin Pop sixty years ago and over the decades.

'Capella Transylvanica' was at the beginning the Chamber Choir of 'Gheorghe Dima' Conservatory. At the initiative of the composer Doru Pop Dorin, the choir came into being in 1955 as the chamber choir of the Composers Union of Romania's Cluj branch, obviously under the patronage of the Conservatory, because that was its headquarters. The choir has quickly developed and reached a high level of performances. I believe the greatest performances were the participation in several international contests, from which I would point out a climax, the Arezzo competition. Since 1978, the year in which the Chamber Choir has obtained the first prize with a score I have never seen again in any competition and not even at Arezzo, 198 points out of 200.

Almost there. And that's how we were. Back then, I was also singing, I was also a chorister. I delight in remembering our performance and I even take pride in it, and besides our performance I also remember a series of tours in the United States, Italy, UK, the former German Democratic Republic, Bulgaria. We have carried a good propaganda for music, and beside these tours in foreign countries, we have also participated in all the great choral music festivals from Romania, which were held in those days in Iaşi, Bucharest and Braşov.

Were there many competitions?

There were more than nowadays.

Because you have been maestro Dorin Pop's disciple, you have received this legacy and carried it on, but you have also given it a new imprint, that of the contemporary world of nowadays. Which is your imprint?

A higher number of people and stronger voices.

Power, more power. I could expand the interpretative palette. And obviously, I have also enlarged the repertoire.

How big is your repertoire?

We have thought about it and mister Pop has also indicated, that the best school for us has been the Renaissance music. Therefore, our repertoire starts from the Renaissance and goes on until the contemporary period, obviously we only cover the most important époques. If I come across a contemporary music festival, I can prepare with the choir without any problems.

What gave you satisfaction in these thirty years?

Above all, the fact that I could support a passionate band, a band whose only purpose in life is to sing. Therefore, art for the sake of art, and in the present Romania, it is less used. We do it and I insist that those who come to the choir come to make music and we do it. The satisfaction is there every time I get on stage. If we do things beautifully, the audience praises us.

What is the musical imprint of this band? What is the difference between this band and the other choirs in Romania because immediately after the '90s, I think, the choir returned and reopened an important door through the 'Madrigal' National Choir, which back then, in the '90s has given back our Romanian carols, we are nearing the winter holidays and I believe it is important to discuss this aspect.

We have also done it immediately after the '90. I have always said: we have a pretty good music quality, we have a finesse of the harmonies. We can tackle a repertoire which can meet the expectations of the occasional audience. We can perform a carol concert, we can perform a classical music concert, a romantic music concert, we can sing anything. We were asked to perform the works of an English contemporary. Yesterday, I glanced over the score, and we will do it.

Until then, we are invited on the 14th December, for the anniversary concert. What will we listen to, because it is such a diverse repertoire?

Yes, I would say it is a mixed repertoire. It has several parts which tackles special things. I have devised this concert in various parts so as to remind the audience the first thirty years of the choir. One could recognize some of the choral works we have interpreted under the baton of mister Pop, but one could also recognize a part of the repertoire we didn't know back then, which has recently been introduced in the choir's repertoire. Moreover, there has been a different type of orientation while considering the époques and a different type of orientation considering the arias. We have a first part of preclassic music, a laic part, let's say a Romanian one, and of course, we cannot waste the opportunity to sing our traditional carols.