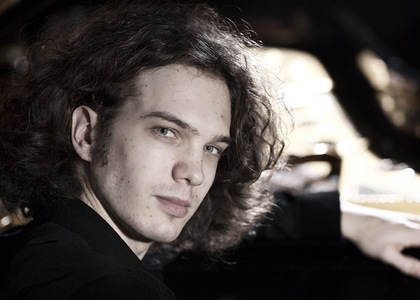 On the Subject of Dinu Lipatti, the Man and the Musician, With Belgian Pianist Julien Libeer

Tuesday, 22 December 2015 , ora 11.25
Belgian pianist Julien Libeer is the protagonist of a record that received a five-star rating from Diapason publication and included two works by Romanian composer Dinu Lipatti. The pieces are Sonatina for the left hand and Nocturne; further information on the recording of the two works, as well as Dinu Lipatti's influence on the career of Julien Libeer can be found in an interview with the Belgian pianist.

Mr. Julien Libeer, currently, events are being held at Bucharest paying homage to a legendary Romanian musician, one of the greatest pianists of the 20th century, an immensely talented and highly valued composer. What does Dinu Lipatti mean for Julien Libeer ?

I was 16 or 17 years old when I first discovered the works of Lipatti, an interesting age for any young musician, because around that time you start to become more aware of the music you are interpreting, and you need heroes and examples to follow, and this is true, not only with regard to musical development, but also for life in general. Lipatti came into my life at a time when I was searching for such a role model, someone with whom I could truly connect, whose example I might follow. The first time I heard his recordings, I was travelling by train from Brussels to Paris. I remember I was astonished at what I heard: an awe-inspiring recording of his performance of Johann Sebastian Bach's Chorale in D Major, transcription by Myra Hess. As I said, at that time I was searching for a role model to inspire me, and after my journey to Paris I started to research Lipatti's entire activity and I managed to gather much information by reading biographies and other materials. It is safe to say this was sort of an obsession, which was subsequently subdued without diminishing my admiration for Lipatti in any way. I believe he was and will always be one of the composers of paramount importance, a true artist, complex personality, a good man and an excellent musician.

As I have correctly assumed, you first discovered Lipatti the pianist, and subsequently, Lipatti the composer. What can you tell us about Lipatti's music? In what way is it special to you?

My interest in this side of Lipatti was a result of the fact that I was first acquainted with Lipatti the pianist. Afterwards, reading his biography I learned that, in fact, he has also composed music. Naturally, this was extremely interesting to me, and I must say that I liked him tremendously from the start. Out of his works, I first played the Sonatina for the left hand and the Nocturne, and I now plan on studying the Concertino in Classical Style for the 2017-2018 season. It is very interesting because, being a Romanian, the composer Lipatti is a child of Enescu, in a way. His music is somewhere between Bartok's and Enescu's. It is terribly sad that he only lived for 33 years, that is to say he did not have enough time for musical composition, because I am certain that his musical language would have greatly evolved, even though it had already reached an outstanding level by the time of his death. His music is perfectly wonderful and I am certain that in Romania it is performed more frequently, seeing as Lipatti is part of the Romanian cultural heritage. There are many scores I never knew about, and I am only now discovering them, for example the Fantasie for piano, which he composed at the young age of 23. A massive work of music, which is completely different from the Sonatina for the left hand and Nocturne, pieces that are neoclassical in nature. The Fantasie is something entirely different, it poses many difficulties in point of technique, but I would like to play it at some point, because I have not had the opportunity thus far.

Do you often perform Lipatti's music?

Yes, ever since I decided to record several pieces, I started performing his music more often. I performed it quite often in the 2011-2012 season, and now I have again approached his works before recording and naturally, I played them in every subsequent concert related to the record.

We know it was by no means easy to procure the scores to Lipatti's works. How did you manage to find them?

It was not so difficult after all; I met the Romanian ambassador in Luxembourg five or six years ago. With a simple petition, His Excellency was able to send me copies of the two works I have recorded, the Sonatina for left hand and the Nocturne. However, I have also been to Geneva, where Lipatti was a professor for 6 or 7 years. They have there an entire archive, manuscripts, unpublished works. I have made copies of numerous materials which I now have here, in my personal library. I have an entire shelf with the music of Lipatti. My hope is that at some point I will find the time to prepare and perform them in recitals and concerts.

Also on the subject of mentors, reading you biography I noticed that the pianist Maria Joao Pires is also one of the mentors who have greatly influenced your career. How would you describe your relationship?

Our relationship is a very profound one. Maria Joao has set no barriers between her professional, pedagogical and her personal life, easily cultivating friendships and beautiful relationships with people. I have known her for 4 years now, and I can say that she was the one who took me under her wing, music-wise. I often play for her a lot, and also we frequently play together piano music for four hands. We have only just returned from a concert tour in Tokyo. She is a special human being and, since we both share deep admiration for Lipatti, as an anecdote, I can tell you that she once told me that at the beginning of her career in the '70s she always used to carry with her a small portrait of Dinu Lipatti wherever she travelled. Among many other things, this is one of the reasons we spend so much time together, and it is extremely important for both of us.


Translated by Elena Gherca
MTTLC, The University of Bucharest
Return to archived Interviews