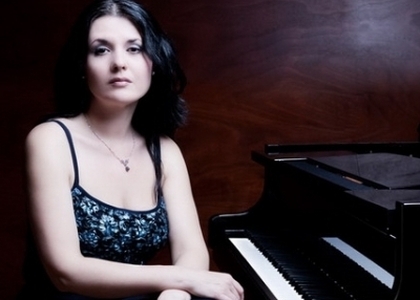 Thursday, 14 January 2016 , ora 13.05
The record with the highest mark out of all unique votes that the audience has cast during the 'Vote the Best Classical Album of 2015' Campaign, which was held on our site is the one signed by the Romanian piano player Raluca Ştirbăţ and it contains the whole piano solo works of George Enescu. The album, which is made up of three CDs has appeared at Hanssler Classic Label and has been released internationally in October 2015, and in Bucharest on 3rd December 2015.

The record has gathered 246 votes and 4.93 out of a maximum of 5. It was broadcast on Radio Romania Music on 4th December 2015 and one can listen to it again on the campaign's site.

Before we start, I want to congratulate you. You are the winner of 'Vote the Best Classical Album of 2015' Campaign. How do you feel?

I am really thrilled and I am very happy and I am honoured by the vote that Radio Romania Music's audience has cast in my favour. I would like to congratulate you for this highly remarkable and definitely welcomed initiative.

The record entered the competition almost by the end of it. Is it a greater joy if you consider the short time in which people voted for you?

Not really, I have not thought of it. I am inclined to believe that this vote is first of all a tribute to Enescu, and, of course, I highly believe it to be an emotional vote, cast for a Romanian piano player, cast for a young piano player and for George Enescu as I have mentioned beforehand, because at that time there were important personalities on the campaign's list such as Martha Argerich or Nelson Freire or Sokolov… Despite all, it is a great joy and I thank again all those who cast their votes.

The record is a special one, which was released exactly six decades after George Enescu's passing. I would ask of you to talk about the hard work you have put into the making of this album.
Yes, it was indeed a lot of work to do and not exactly a piano player's work. There are years of searching in the archives and gathering them all up, because I already had recorded the Piano Suite No. 2 in D Major or Opus 10 or the Impromptu Concertant. I have specially recorded once more the First Sonate in F Sharp Minor for this album. After this, I have recorded many other novel works, some of which were recorded from the manuscript, because they have not been edited, yet. The most difficult part of studying and gathering works was in the first half of 2015. There were two recording days and five days in all - three days in April and two days in June - and of course, it was a though marathon both for the mind and body, but all's well that ends well. I am glad I have succeeded in ending this project properly. It was an old project of mine and also a dream. I have always considered it a necessity and an accomplishment I am proud of.

It's obvious that you have a good start in 2016. What projects do you have this year?
There are a lot of projects; some of them are part of the 'mammoth' category, but I like to speak about projects only after they are finished - take it as a superstition if you want . What I can say about the projects at this point is that there are projects connected to George Enescu and Romanian music. I intend to record the whole piano and cello works of George Enescu with cellist Rudolf Leopold from Vienna. We have already done it live, during a concert, but we really want to record it.