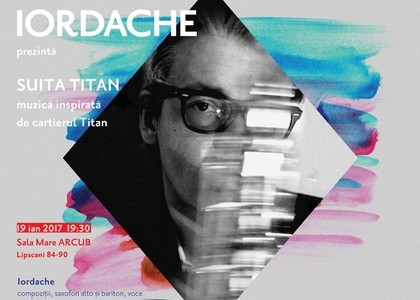 Wednesday, 18 January 2017 , ora 10.29
Jazz@ARCUB 2017 starts on the 19th of January 2017. The 'Artist in Residence' programme, taken care of the jazz pianist Lucian Ban (living in New York, born in Romania), starts the new year with a premiere - Iordache presents the "Titan" suite, an original work for jazz sextet, inspired by the known neighbour in Bucharest. More details coming from him:

On Thursday you will begin the jazz season at ARCUB and you present the Titan suite in premiere. What other surprises do you have in store?

The surprise is the suite itself. It was composed pretty fast, in just one month since I got this invite to play at ARCUB. The organisers had one condition, to be an original music and because I wanted for a long time to write something about the neighbour in which I grew up, I wrote this suite of songs. They're actually songs, some of them have some lyrics by the poet Florin Dumitrescu. The rest is just jazz.

What are the sources of inspiration for this creation?

It's about a sentimental and personal archeology. It's about my childhood and youth in Titan. I'm born in 67'. It's about the first kindergarden where I've been to unofficially, the fact that I've seen Nixon when he came in 71'. I think that in 69' we saw the Moon landing, our childish countings, school, games, the American movies, all the things that composed my childhood and teenage period, while Romania was heading towards neostalinism. We were growing and finding things and there were two opposite events- one in the society, one in our heads.

Whom will you play with?

What other projects are you planning?