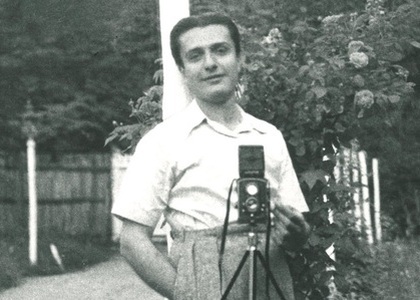 'Lipatti between worlds' - an exposition of ICR Vienna

Thursday, 2 February 2017 , ora 16.05
The ICR Vienna gallery has, beginning with Wednesday, the 1st of February 2017, an exposition in memory of Dinu Lipatti which contains interesing images made by the Romanian musician. The black and white photos recompose like a puzzle the atmosphere, the familial and personal feel, where Dinu Lipatti's activity as a pianist and a composer was cizeled and perfected. The images, kept as negative support from glass, were technically and artistically processed with the help of the Photographic Poetics School "Francisc Mraz" in Bucharest. The images were exposed in premiere during the "Days of Lipatti" festival in 2010, organised by Radio România Muzical. Irina Cornişteanu, the manager of ICR Vienna, told us more about this initiative:

The exhibition is called "Lipatti between worlds". It shows us through images made by Dinu Lipatti his concern for the environment in which he lived and the attention he gave people around him, but at the same time, a look in the mirror by a self-portrait which Dinu Lipatti made, this portait being preserved and restored.

The exhibition is open starting this day until the end of the month, being the main event which we are dedicating to Lipatti in February. ICR (the Romanian Cultural Institute) in Vienna will organize this year 12 events dedicated to Dinu Lipatti. The series of events started in January when it was the Romanian Cultural Day.

What's next in this evening that is dedicated to Dinu Lipatti?

Most concerts will be held by young pianists. Some of them are studying in Vienna at the Conservatory and at the University, but we also have guests from Romania among which two children, who from an early age have played piano, one of them being a gifted composer and dedicating a song to Dinu Lipatti. In the next months, we will keep you posted about the events we organize.