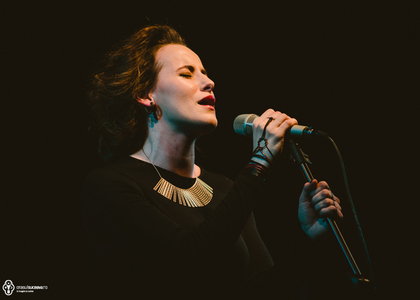 Thursday, 16 February 2017 , ora 14.11
A slender, petite figure, a definite voice color, an artist with a broad range of possibilities and deep pursuits expressed through a type of music that is harmonized with the newest directions in the field of jazz and beyond it. She graduated, under the tutelage of pianist Mircea Tiberian, from the Jazz Department at the National University of Music Bucharest, after she studied the violin and collaborated with important artists from the Jazz music scene: Mircea Tiberian, George Natsis, Sorin Romanescu, Mihai Iordache, John Betsch, Chris Dahlgren, Albrecht Maurer, George Dumitriu, Alexandru Arcuş, Sorin Romanescu and many others. Together with her group she won different prizes, in 2012 at Tg. Mureş, "Best Vocal Performance Award"a year later, at the Jazz Festival in Sibiu, and in 2015 she won the "Best singer" award at the International Jazz Festival "Johnny Răducanu". We have seen her perform with the vocal group "Jazzappella", then with "Blue Noise"; she leads her own quartet/quintet group and she also has an impressive resume regarding her participation in the Jazz Festivals in Romania starting from 2009.

There is a poster with a black background, with an exquisite sculptural profile, Ana Cristina Leonte as the lead singer of the Radio Big Band. The poster doesn't reveal any other information. That's why we invited Ana-Cristina Leonte. Welcome!

Glad to be here!

We would like you to give us very detailed information about the concert on Thursday, the 16th of February.

Somehow it's a good thing that the poster doesn't reveal everything. This might intrigue the listeners and determine them to come to the concert. And, anyway, a poster can't express what it feels like to be in a concert hall and listen to the live music. Live is a very suitable word to describe a concert performance and what happens at one, when you vibrate with the artists on the stage... and this exchange can only happen if you are there, close to them. An essential thing that the poster doesn't reveal is that the colleagues from my Quintet will be guests at the concert on Thursday evening: Albert Tajti on the piano, Octavian Scurtu - drums, Michael Acker - bass, and Alexandru Arcuş - saxophone. We will sing a few songs from a repertory we recently developed for the concert we had at Arcub on the 9th of February as part of the "Artist in Residence" Project, where pianist Lucian Ban is a trustee...

Theoretically we shouldn't play with the Radio Big Band. A few songs will indeed be performed separately, but the surprise is that my pianist, Albert Tajti made arrangements for wind instruments for two of our songs. I think we will play one or two from the Bucharest Jazz Orchestra album, which was directed by Sebastian Burneci, who we all know is a trumpeter in the Radio Big Band, so that there is a link between the Big Band songs and the ones from our repertory, which are a little bit different.

That's what I wanted to point out, because there's a big difference between the big band repertory and the music that you have presented last week. So let's talk a little about electronic music. It is a project that you are involved in and you're doing very well. How did you discover this side?

I think the progress happened naturally, in a way. It happened because I met different people and I collaborated with them and it happened step by step. I didn't plan to turn to electronic music starting tomorrow, and I still can't claim this. It's just that things are taking shape, they are solidifying with the musicians that I play with on the stage. But I don't think they exclude themselves. I'm really happy that I will be singing with the Radio Big Band on Thursday.

It's not your first collaboration.

You also participated in the Radio Romania Cultural Awards Gala...

Yes, for years ago.

...And, if I'm not mistaken, you sang with the Jazzappella group in an edition of "Jazz in Romanian".

...so you are old aquaintances.

How important is it for a jazz musician to fully express himself or herself also in the field of composing, not just that of performing?

This was a different stage for me. Faculty was practically this stage of singing and performing standards and of acquiring a jazz language with the help of this standards. Then came the next stage, when I felt that I had to do something and directly express what I was feeling and experiencing and to directly express what had influenced me. And, in a way, I feel like I couldn't have done it with jazz music. Let's be honest, the majority of jazz standards are from the `40s, `50s, `60s, the majority of the vocal ones. Of course, there are some newer ones too, but they are a language of american music interpreted at the highest level possible at that time. And, somehow, being stuck at the stage of reproducing that music didn't work, for me, at least.

We live in the 21st century!

Yes, and we listen to different music, we live in different times, in a different country, in the era of information. Information travels so much easier nowadays. So for me, this was a stage that I assumed and now I feel that I use this knowledge, but, in all honesty, I don't like to argue about this jazz label. Miles Davis said 50 years ago: Jazz...I'm not interested anyway. I revolutionized music every other decade anyway, and I'm not interested in its label.

Still, I will insist on this and ask you, because we are at Radio Romania Music, how would you present your music to a public that usually listens to Bach, Beethoven, Mozart?

When it comes to my music, jazz isn't the only influence. I studied the violin for 12 years and I realized that I have songs in which this is noticeable. It's a very important influence for me. Those who listen to classical music might get scared when hearing about jazz. In fact many people who don't usually listen to jazz get scared, but I think that they simply have to open up their hearts and their ears and give it a chance, not to mention that there are so many different styles and types of jazz that I am sure there is at least a tiny part that any listener could resonate with. They might not like free jazz or maybe they might if they like contemporary music... in fact there is such a fine line between them.

I would also talk a little bit about "Angel minus wings", such an interesting project, in which the borders between styles are greatly faded. How did this project come to be, what message do you want to send with this music?

I made the "Angel minus wings" album together with Tavi Scurtu - the drummer in our Quintet. As I was spending a lot of time at home, I wondered... what would it be like if the two of us made it without live instrumentalists. So that's why, in a way, it happened pretty fast. We made the album in less than a year, because we were just two people working on it, at home and electronically. There were things that only took the two of us. Of course, Michael Acker, Albert Tajti and Dan Mitrofan are featuring in some of the songs on the album. The message, (in fact that's where the title "Angel minus wings" came from) is, for me, a metaphor for the human condition, and I invite the listeners to imagine what it would be like to act like angels, even if they don't have wings, or if their wings are yet to grow. And I invite them to try to go through the world in the most beautiful way possible. And, in some way, I'm diverting the attention toward my first album, "Secret love", which is a love album, a little more personal, more intimate. Here I'm already starting to talk about people from my own experience, obviously, although sometimes I feel that there are some things that come from beyond my experience and I don't feel that I deserve any credit for it.