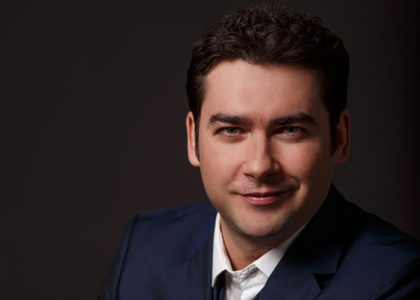 On the 17th of February 2017 tenor Teodor Ilincăi will carry out the the first show of the "Tosca" series, by Giacomo Puccini, at the Sydney Opera House. Under the conduct of another Romanian musician - Christian Badea - Teodor Ilincăi brings to life the character of "Mario Cavaradossi" in a series of shows that will be taking place until the 7th of March. The lead role belongs to Spanish soprano Ainhoa Arteta. The directorial vision belongs to John Bell.

Teodor Ilincăi, it's the interval of the Tosca opera premiere, that you are playing in, therefore it's a fresh interview. Good evening, how is the Tosca premiere going?

It's going very well so far, it's a special feeling, because I really wanted to sing at the Sydney Opera House, in this special place. The public's reaction has been extraordinary so far and I hope it will stay like this until the end.

Is it a premiere for the Sydney Opera House or did you become part of an older show's distribution.

It's an older show, but they treated it like a premiere because every time there are other soloists invited and we have to incorporate really well what the stage director wants to draw attention to.

Tell us about this staging - modern, classical?

There is another Romanian in this distribution, conductor Christian Badea.

Yes, I was very glad to work for the first time with maestro Badea, who has an amazing career in the world of opera and who is an expert on Puccini's style and probably on many other things. We got along great and I hope to collaborate with him in the future, because I had plenty to learn.

Tell us about who will play Floria Tosca. There are two interpreters in the distribution.

Tonight I will sing with the Spanish soprano Ainhoa Arteta, who is an old acquaintance of mine. I first played in Tosca with her and I will also play with her the first time we do it in Sydney. She's an extraordinary artist and a special person.

Scarpia is an also very well-known Italian baritone, his name is Lucio Gallo; he has an extraordinary career, in Italy as well as abroad.

You were saying that it's 8:30 p.m. there, that the first act already took place.

So you sang the first aria and the Tosca duet.

Which was very appreciated by the public, I understand.

Tremendously appreciated. I think this was the first time since I started playing in Tosca when there was a round of applause after the duet. The conductor had to interrupt the duet, the public wouldn't stop applauding and I liked this very much.

And, of course, it encouraged you further on.

Without the applause of the public you can't really go on.

Teodor Ilincăi, I will let you rest for the second act. I wish you good luck and I hope we will talk again, to tell us about the public's reaction to the next shows.

It will be my pleasure.