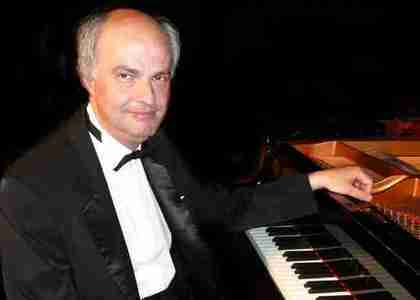 First audition of one of Dinu Lipatti's works at the Romanian Athenaeum!

Pianist Viniciu Moroianu invites you to his recital this Saturday, on the 25th of February, 2017, at 7 p.m. in the Large Hall of the Romanian Athenaeum, and the special reason for which we are discussing this moment from the season of the Bucharest Philharmonic Orchestra is the presence of Dinu Lipatti's music in the programme. In 2017 we are celebrating the centenary of the great pianist's birthday but also of the composer that we still have to discover - and on Saturday there will be an absolute first audition: the Romantic Sonata. We want to find out more about this opus, which was left unfinished in 1937, from one of the most qualified experts in Dinu Lipatti's works - because I know you wrote a doctoral dissertation on this. So what should we expect?

It's a type of music that I believe is incredibly interesting, an ambitious piece of work, written at the age of 20, which ended up in just one part - other parts might have followed... a piece of work which will first appear before a public in a few days and which clashes together two completely different and contrasting styles: the romantic air, as the title suggests, and another aspect, that of sarcasm, irony and a kind of harsh, stravinskian writing, that I'd even call anti-romantic. So it's practically the antithesis of two worlds. In the end the romantic air wins and ends the piece of work, in a lush piano atmosphere, that accounts for the extraordinary pianistic abilities that Lipatti already had at that age. In total there are only seven minutes of music, but they are incredibly dense. I, for one, hope that this piece of work, which was realeased these past days, will have a beatiful course in the concert halls in our country and abroad, because I strongly believe in its value.

Let's hope so. We should remember that Dinu Lipatti was an extremely appreciated composer, as a disciple of Mihail Jora, winner of the "Enescu" Prize and George Enescu's preferred chamber music partner. Lipatti also admired Igor Stravinski without reservations; he knew him very well and you also mentioned his influence in the Romantic Sonata. He was also Bela Bartok's admirer. Is the style of this sonata somewhere between romance and modernity?

Yes, it is. And this antithesis is, in a very ambitious and modern way, a kind of creation thesis. It is absolutely interesting and fascinating, considering it was written in 1937.

We know you have restored this piece of work on score - it is already in print, in a critical edition. It was published at GrafoArt, wasn't it? It is available as far as I know.

It came out last autumn.

On the 14th of February at Arts House, Sector 3, you played Dinu Lipatti's Fantasy, probably one of the most ambitious and extensive of his works for the piano. But let us remember that we are talking about an artist that didn't get to show his worth the way he deserved to; he died at the age of 33. How are you planning to celebrate the Year of Lipatti?

The recital that you mentioned was in fact an evening dedicated to Lipatti's work, the peak of which was this five part Fantasy, a musical discourse of almost half an hour, written later, in 1940, a piece of work that Lipatti sang at the Romanian Athenaeum, in an anniversary concert for the Society of Romanian Composers. It was never played again for decades after this event, until I had the privilege to bring it back to life in 1992, so after 51 years from that first audition. I will continue, of course, to play Lipatti's works all throughout this year, and to try to impose them in concerts. According to the catalogue written by Grigore Bărgăoanu, Lipatti wrote 49 incredibly diverse compositions: chamber music, music for wind instruments, symphonic music... His piano compositions are just a part, not the majority, of his entire work. This accounts for a composing type of thinking that showed real major promise, as his great contemporaries realized, starting with George Enescu. Thus Lipatti's composing enthusiasm is outstanding; he had this obssession to compose, to create. At some point the time for creating...

...significantly diminished, because he had to play in concerts...

...it was reduced because of his concert season and because of his disease, but he left at least a few referential titles for the Romanian musical patrimony: Three Romania dances or Sonatina for the left hand. I will continue to play. During the Enescu Festival I will interpret the Concertante Symphony for Two Pianos and String Orchestra, with The Camerata Salzburg, I will play Concertino, with the "George Enescu" Philharmonica, I will have a Lipatti moment at a recital in Besançon - that long-lasting festival where 67 years ago Lipatti had his last recital. And so on... during the entire year I will dedicate myself to this centenary, I will continue to publish and research and I believe no effort is too great for showing the value of this extraordinary and mighty legacy that Dinu Lipatti left for posterity.

In the programme for Saturday you also have his more well-known Nocturne in F sharp minor, op. 6. The programme ends with Robert Schumann's Symphonic Etudes, another opus which Lipatti played often. Did you plan the entire programme under the influence of his repertoire? Am I wrong in saying this? Is it too much?

Yes and no. As far as I know, Lipatti didn't play the other two works, Bach's Chromatic Fantasia and Fugue and Beethoven's Sonata op. 101, but of course, Bach was one of the most loved composers played by Lipatti and the clarity and balance that Lipatti showed also when playing the music of the great Johann Sebastian Bach are absolutely referential. I planned the recital to be as unitary as possible taking into consideration the diversity of the styles and I will try to make the evening as beautiful as...

I'm doing my best to honour the expectations of the public.

This was pianist Viniciu Moroianu, inviting you not to miss his recital this Saturday, the 25th of February, at the Romanian Athenaeum, especially because Dinu Lipatti's Romantic Sonata will pe played in first audition, followed by his Nocturne in F sharp minor, op. 6. Thank you for your time!