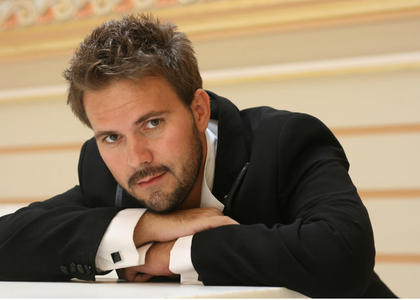 Interview with the baritone Florin Estefan

Interview with the baritone Florin Estefan

On the 4th of March, the Romanian National Opera from Cluj-Napoca welcomes spring with an Opera Ball, together with the soloists: Hector Lopez, Cristi Mogoşan, Tiberius Simu, Camelia Crişan. The baritone Florin Estefan is also part of the distribution, and he also has the position of director of the institution – the position from which he’s spoken about this event.

It has become a tradition of more than a quarter of a century, this opera ball for which we choose a different theme each year and to which we invite the ones who help us throughout the season in various ways, both as partners and as public, to join us in celebrating spring, in celebrating music, here at the opera ball.

What is this year’s theme?

We’ve chosen a theme which has little to do, so to say, with opera music, because, it being the Union’s centennial year, a centenary in which we will only focus on Romanian music, on cultural values, and on what national unity means to us, we wanted it to be a preamble and so we’ve decided that this year’s theme will be centered around the popular Romanian music of the ’70s, the ’80s, and even the ’90s, although sung, of course, by the whole ensemble of the Romanian National Opera from Cluj-Napoca: and here I mean the ensemble of the National Opera’s orchestra and our soloists. Basically, it will be a pop opera, but with this repertoire, which some of us or some of our parents have grown up with.

You announce the extraordinary participation of Andrei Tudor.

He is the one who has arranged the songs and prepared them for this event. He will also conduct the concert. We take the utmost delight in collaborating with Andrei. Personally, this is my first collaboration with him, and it augurs well and we wish that in the future we will have more projects together, which will be just as interesting. As you’ve seen on the poster, in the second half of the opera ball, we’ve kept wondering who to invite and we’ve reached the decision that nobody else would be better suited for this theme than Holograf, which is a band which brings together the music and times of the past and the present day. And we are just as happy to have them here, on our stage, for the second half of the opera ball evening.

Could you name some of the soloists which will perform on the stage alongside you?

Alongside me on the stage will be Camelia Crișan, Cristian Mogoșan, Hector Lopez, Tiberiu Simu.

And there will also be a choreographic moment.

Adrian Strâmtu. They are not part of the National Opera’s ensemble; they have been invited by dr. Miko, the organiser and producer of this event.

And because you are the manager of the Romanian National Opera from Cluj-Napoca, we would like you to disclose some of the projects you are preparing, during this season, for the citizens of Cluj.

On the 17th of March, we will have a premiere on which we have been working for some time, with the music of the maestro Cornel Trăilescu. We will put on stage “Puss in Boots”, a spectacle for children, or for both parents and children. It involves the whole ensemble of the National Opera, a multitude of soloists, the chorus, and the orchestra. It is a spectacle which will be pretty difficult to hold at a matinee, and this is why we would like to focus our attention on the families who could come with their children to this spectacle. Then, in April, we will have back on stage, as we will add back on the poster, „Tannhauser” and „Don Carlo”, with distinguished distributions, and both spectacles which we hope to become an event; and, in May we will have another premiere, for the first time in Romania, for “Zorba the Greek”, by Mikis Teodorakis. Afterwards, in June, as we’ve already got the citizens of Cluj accustomed to, we will have that project, called Opera Aperta, for which we will come to the Cluj Union Square, with the assistance of the City Hall, the Local Council, and our partners, and we will have an open-air performance for “La Traviata” and for this spectacle, “Zorba the Greek”.