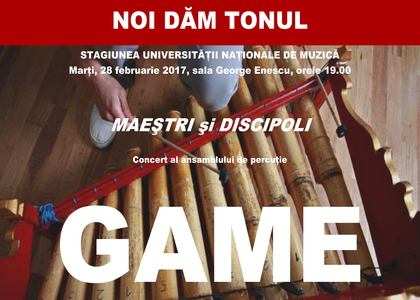 Thursday, 23 February 2017 , ora 10.48
It starts on Tuesday, the 28th of February 2017, with a percussion concert, recorded by Radio România Muzical which is a partner of the series of manifestations.

The National Music University turns more and more into something more than an institution of superior musical education, even if it's an elite one. And our broadcasting station is beside the National Music University regarding the transmissions from the Harmonium's Show in Berlin, but also now, starting with the 28th of February, when they inaugurate a new show about the relationship between generations. The initiative belongs to the pianist Verona Maier, the vice-chancellor of UNMB. And knowing you, ms. Verona Maier, I'm sure that it's because there was a necessity. I'd like you to talk about this necessity, of the show's arrival which starts on the 28th of February.

This show's concept which sounds pretentious "a concept", but is really a concept, because it's actually about a strategy which the University takes into consideration for a very long period of time. The concept, I was saying, is one of closeness and accomplishment of the meaning of the artist's existance in society. It may sounds a bit pretentious, but I believe that as long as we don't have someone to communicate to, we, artists, have a problem regarding the meaning of our existance. I think that the most important thing that a musician can do is speak to those who, because they have been perhaps less gifted, fortunate or preocupied with this, can't use the musical language as a way of communication, but only capture the emotion which the musical language always brings when it's well presented to the receiver, meaning the audience.

We also want that the concert hall "George Enescu", an exceptional hall with a very good acustic because it was designed as a concert hall, for this hall to reenter the Bucharest circuit of musical manifestations...because I believe that in an European capital, in a modern capital, but also in older and not at all modern capitals, the hall of an institution of this kind, of superior musical education, must be a place filled with future artists and also future listeners or those who cannot live without music, and for this reason they are looking for the halls where musical events take place.

And why a dialog between generations for this scene of showing the performing potential of the Music University?

You probably reffer to the first concert which, beside the slogan with which we want to impose in from of everyone, meaning "We set the tone", the poster also contains the title "Maestros and disciples". Why is that? Because in my oppinion, an institution of superior education lives through teachers and students equally. I also believe that a society lives through tradition and perspective equally. That's why, on the poster of this first concert, on the 28th of February, which will also be one of this show's directions, there is this title "Maestros and disciples" which hides the quality of maestro and disciple which the two leaders of the Game Ensemble have, meaning PhD Alexandru Matei- an exceptional percussionist and well-known in the Bucharest concert world- and his disciple, PhD candidate Sorin Rotaru, likewise renown, but also other maestroes and disciples, because there is on the concert's poster a first audition by Lucian Zbarcea, a PhD student at the National Music University. He is being taught by professor Dan Dediu whose student he was in his first years at our University. So, in a very organic way, this title "Maestros and disciples" suits wonderfully this first manifestation.

Can the audience purchase a ticket or is it for free? Can you clear this out?

It will be for free because I think we didn't propose to sell a cultural product. For now, we proposed to offer a cultural hook to those who is important to communicate through music and to those who we can bring some happiness into their lives this way.

Do you have a schedule for these concerts?

Yes. For now, these concerts will take place every Tuesday and we will take care to communicate this in time to all the media channels, so that the audience to know about the next event from the next Tuesday.

Do you already know? Do you have the exact data of the next concerts?

Yes, we know we'll be having a few events, meaning the visit of an ancient music ensemble, an organ festival, there will be the "Chei" festival with an opera galla in a Tuesday...So, it's already a long list...The Te Deum Laudamus Choir will come in a Tuesday before summer comes. Also, during the International New Music Week, we'll be having one of the Tuesday concerts. Hopefully, the national music colleges in Bucharest will be present, because we made this invite, in other Tuesdays. There is an interest towards all the future of this school and country means.

Thank you so much! We'll announce your events and we are beside you.

Thank you very much. We're counting on it!