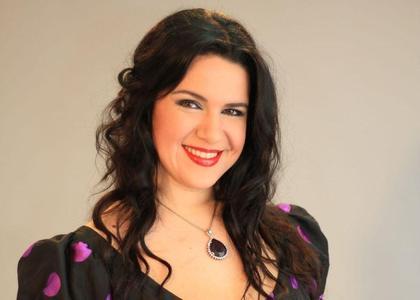 Friday, 3 March 2017 , ora 10.22
A vocal-symphonic concert, in which conductor Paul Nadler led the Symphonic Orchestra and the "George Enescu" Philharmonic Choir took place on the 2nd of March, 2017, at the Romanian Athenaeum. For the first part of the programme, the public listened to some of composer George Foca-Rodi's works: "Lamento for the Holocaust", "The Dawn of Victory" and "Meditation", the last one being dedicated to Irina Iordăchescu. The beloved soprano also appeared in the second part of the concert, performing Wolfgang Amadeus Mozart's "Requiem". Mezzo-soprano Antonela Bârnat, tenor Ionuţ Popescu and bass Marius Boloş were Irina Iordăchescu's partners. We asked her to give us more details:

Irina Iordăchescu, one of the works in the concert at the Romanian Athenaeum is dedicated to you. What can you tell us about this ?

It's a world premiere, a piece of work written by George Foca-Rodi, in memory of the victims of the Holocaust. The third part of this piece is called "Meditation" and the maestro who composed it, maestro Foca-Rodi, dedicated it to me, after watching a few of my videos on Youtube. That's what he told me... that's what he wrote to me and of course, I was extremely flattered and happy. It's not at all an easy piece, neither is the other part, "Lament for the Holocaust", in fact. They are both quite difficult regarding the vocals, but they are extremely interesting, and have some sound effects that I believe the public won't anticipate, won't expect. They will have an intense emotional impact. The second part of the programme will be Mozart's Requie, which I am also performing, together with Antonela Bârnat and my colleagues, Marius Boloş and Ionuţ Popescu.

I understand that there wasn't a direct collaboration with this American composer, George Foca-Rodi, he simply heard you sing.

Yes, that's right. He heard me. It so happened that he heard my voice, he also saw the videos that are available on Youtube and for him it was a discovery, a surprise, he really liked me and besides the first part, "Lament for the Holocaust", which was supposed to be the only one, he wrote another one, for me, "Meditation". I received it in February. Quite recently. He told me my voice had inspired him to write it.

Did you discover George Foca-Rodi's music now or were you familiar with his works?

No, I wasn't. We've only met now and, unfortunately, I am a little ashamed to say, I haven't yet had the chance to listen to the music he composed. We are even talking about a world premiere, this piece has never been performed before.

It's emotional, of course, and the subject is also emotional. I don't want to reveal too many details because it would be a pity, but I can guarantee that the public will have an incredible surprise, because no one will expect certain sound effects, intertwined with the musical discourse. I am thrilled and overjoyed to be a part of this concert.

Tell us also a little about the collaboration with the guest conductor.

I collaborated with him once before, a few years ago, at the Romanian Athenaeum. A lot of meaningful meetings that were a privilege for me, as an artist, happened at the George Enescu Philharmonic. He's a conductor that I greatly appreciate. Our collaborations are always incredibly beautiful. He just asked me about my opera repertory and about how we could repeat this collaboration in an international environment.