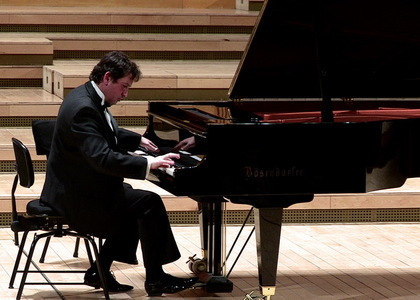 Interview with Horia Mihail, two days before the debut of the 'Traveling Piano' national tour - 2017

Tuesday, 4 April 2017 , ora 11.18
The VII-th edition of the marathon you suggest every year is set to debut on the 5th of April in Chişinău. It is a series of concerts dedicated to the Waltz (not referring to the once popular dance that still gathers a large audience every year on the 1st of January in Vienna, but rather the Waltz of Frédéric Chopin and Maurice Ravel). Firstly, I'd like to clarify the backgrounds of your tour. From the perspective of Horia Mihail, what's the symbolism behind the Waltz reflected in the concerts of this tour?

The idea doesn't belong to me. There are plenty of other pianists that organize such concerts, not comprised of the same elements I suggest to my audience, but having similar works as its components. I chose some works that I have never interpreted before. Therefore, in two days time, the recital in Chişinău will be an absolute premiere for myself and the audience alike. Soon enough, however, this program will turn into a routine, the first four days having four consecutive recitals in Iaşi, Piatra Neamţ and Roman, all cities of Moldavia. I enjoyed the idea that French pianist François-Joël Thiollier had. I had listened to his works many years ago, almost 15 years ago, I think. Here in Braşov, at the Chamber Music Festival, he introduced a new version of Waltz history. I never intended to create a history of the Waltz, but simply introduce the Waltz from the perspective of two different geographical areas, one that's closer to Vienna, in the first part of the recital, and one that draws farther from Vienna and brings us near Paris. We get completely different visions of two groups of composers, but even between the two we can observe differences in style, expressions, differences I will certailny try take advantage of to the fullest.

We're talking about the works of Franz Schubert, Johannes Brahms, Antnin Dvorak, Frédéric Chopin, Maurice Ravel and Claude Debussy, as we can see in the press release that I received. How many works are we referring to?

A large number of works! From Schubert, I have chosen a set of four ländler. A while back, I have listened to the great Sviatoslav Richter by chance, and he was interpreting these superb, yet extremely simple songs and I immediately decided to open the recitals with this musical gem. Then, we have 16 waltzes by Brahms and another four by Dvorak. After the break, we have the two Op.69 waltzes by Frédéric Chopin. There are, yet again, eight noble, sentimental waltzes. The recital will end with two superb and well known waltzes by Claude Debussy.

It is the VII-th edition of the tour. You most certainly have plenty of experience when it comes to continuous effort on a rather short period of time. How do you usually prepare, from a physical and logistical point of view, how do your concert preparations look like, having less than a couple of days between each recital?

In previous years, I haven't trained as much as I did this years, and not from a musical point of view, I'm actually referring to sports.

This year, I decided to get back in shape and I started and intense workout routine. I hope it will soon pay off.

On the 19th of April, we welcome you at Sala Radio. From what we've seen, it will be the only recital from this year's edition. Do you intend to also record the recital on CD in the near future?

I have thought of it. It would probably be a really good idea. Maybe even in Bucharest, if no small accidents or cellphones will occur. We can try making a new CD with Casa Radio Publishing, especially since the last CD, the one with romantic music, was so well received.

I suppose you will also donate a piano to one of the locations from your itinerary. It would be the fifth piano.

Yes, it's true. It's a piano that belongs to the Romanian Society of Broadcasting and it will be given to a community that is very dear to me, the audience in Caracal. I'm sure this instrument will be an asset to their intense cultural activity, especially to the lovely theater in the city.