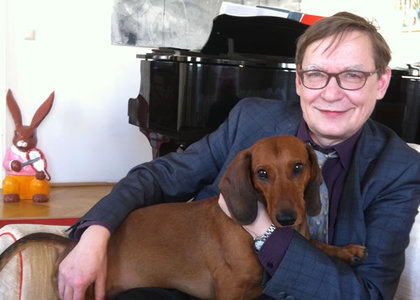 Friday, 5 May 2017 , ora 10.04
This is Finnish composer Kalevi Aho's first time in Bucharest where he will attend the Romanian premiere of his Flute Concerto, brought to life by Matei Ioachimescu and the National Radio Orchestra, under the baton of Gabriel Bebeşelea. Here is what he had to say about being here.

Welcome to Bucharest, Kalevi Aho! Is this your first time here?

What is the story behind this piece?

It was commissioned by flutist Sharon Bezaly, to be recorded with the Swedish label Bis. I wrote it in the summer of 2002, in about two and a half months. I was at my summer home with my dog, who was sick. I thought those were the last days we would spent together in the woods… I therefore had a general state of melancholy. On the one hand, I was having a wonderful summer, very warm, but on the other hand there was sadness for my trusty companion. For that matter, he was gone by the following winter… This was my frame of my mind while composing this concerto.

I need to feel the general atmosphere of a work before actually writing it. I don't necessarily need musical material, but some ideas and feelings… When I started writing the concerto, I didn't know where it would lead, what the ending would be. I made no sketches, but proceeded to the fully orchestrated version. Once I had written two thirds of the piece, I understood its ending. It was like a story revealing its denouement to the writer.

You are known as a composer who prefers large ensembles. What are your current projects?

I am working on a new symphony, No. 17, after which I will move on to four concertos, each for a different instrument. I will also work on some chamber music, between the concertos. I have commissions for the next three years and I could have had more, but I turned them down. It's enough to have some work for these three years, and then I can think about what I want to do next.