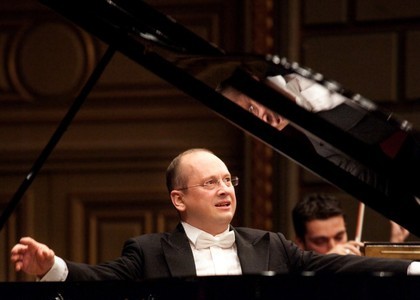 Friday, 12 May 2017 , ora 9.07
"Transylvania" Philarmonic Orchestra from Cluj Napoca presents on Friday the 12th of May 2017 a concert in memory of Dinu Lipatti - our great musician born 100 years ago. From 7 o'clock p.m., at The Academic High School; As guests, there will be the English conductor George Jackson, winner of the Aspen Prize in 2015 and the pianist Eduard Stan, born in Brasov in 1967 who immigrated to Germany when he was 11. He will perform the Concert for piano and orchestra by Robert Schumann, a piece whose recording signed by Dinu Lipatti has remained even today an international reference point. In the second part of the concert from Cluj-Napoca the audience will listen to the Enigma Variations by Edward Elgar.

Details about his presence in the concert and also about the programme were given to us by the pianist Eduard Stan.

You are invited to perform at the Philarmonic Orchestra from Cluj-Napoca in a reverential concert for Dinu Lipatti, but you also have scheduled some other recitals dedicated to the famous Romanian pianist this year. How do you relate to Dinu Lipatti's art?

Dinu Lipatti is, undoubtedly, one of the most important Romanian cultural figures. I consider him, next to Radu Lupu and Clara Haskil- the most outstanding protagonists in this field. Lipatti is very clear, very rational, without many ornaments, quite classic somehow… and in this sense I believe that the lipattian style can influence any pianist, giving him a really "non radical" thinking… I think of him as a great model.

At Cluj-Napoca you will perform a piece which was part of Lipatti's repertoire - Robert Schumann's Concerto. How do you approach this opus?

There is a very representative performance, the famous one recorded by Lipatti with Herbert von Karajan, which follows the exact same line I have tried to describe. Of course, Schumann's Concerto can be interpreted quite different, but there is a certain internal classicism in it; therefore, it can be said that Lipatti is a very good model for this concert. This was exactly the point, to pay homage to Lipatti through a symphonic concert with a very representative piece.

Is this your first collaboration with the English conductor George Jackson?

Yes, this is our first time working together. I've noticed that he is indeed a very talented and young conductor and I've really enjoyed this meeting.

You are going to have some recitals this summer in Germany which are dedicated to Lipatti. What do people there think about our great pianist and composer?

There is a certain appreciation mainly among experts…any student, any expert has heard about Dinu Lipatti but, however, nobody actually knows who he really was, fact which applies to George Enescu as well. To me, both Lipatti and Enescu were absolutely brilliant.

In the end, can you give us some details about your recitals in Germany?

These performances are a way of sharing the love I have for my native country and a way of making known the Romanian repertoire to the German audience. And I have chosen works by Lipatti and Enescu precisely to promote the most important Romanian creators in this field.