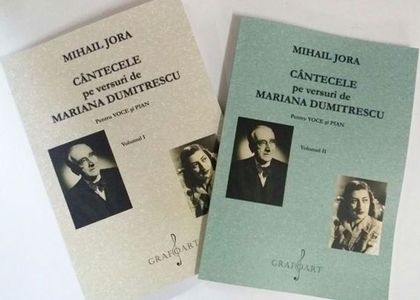 Monday, 15 May 2017 , ora 13.52
Today, on the 15th of May 2017, at the Central University Library of Bucharest there will be a poetry and music recital commemorating poet Mariana Dumitrescu, who passed away 50 years ago. At 6:00 PM there will be a book release, 2 volumes entitled The Complete Works of Mihail Jora, with lyrics by Mariana Dumitrescu. This edition was prepared by Ilinca Dumitrescu, the daughter of the poet, who gave us some additional details in the following interview:

Everything is built around the release of these two volumes - the complete works of Mihail Jora with lyrics by my mother - with a very interesting scholarly study as introduction, by musicologist Ileana Ursu, who is living in Canada at the moment. Joining me will be soprano Georgeta Stoleriu; as well as Matei Bănică, director of the Musical Publishing House GRAFOART. And then, we will hold a poetry recital… I will be joined by two great actresses from the National Theatre of Bucharest, Mrs. Simona Bondoc and Mrs. Ilinca Tomoroveanu, as well as poet and actress Lidia Lazu, who will recite selections from my mother's poetry. Afterwards, the Arioso Quartet will perform Quartet in C major, composed by my father, Ion Dumitrescu.

Let us return to the two volumes. Tell us in more detail what the editorial process consisted of. What are the means and time resources involved in such an undertaking?

These lieds were edited half of centrury ago in three notebooks and comprise 49 lieds gathered in nine cycles. The lyrics were extremely well-liked by maestro Jora. The editing process was very meticulous, since I also provided the manuscripts that I have archived. You will see this on the back cover, but also inside… every volume contains several facsimiles, as well as photographs that have never been published. This is a special edition; it isn't just sheet music, but also a cultural object, an objet d'art.