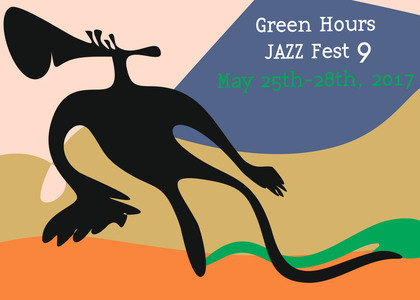 Thursday, 25 May 2017 , ora 12.58
The garden on Calea Victoriei no. 120 will once again open its doors for the newest edition of Green Hours Jazz Fest. Between the 25th and the 28th of May, jazz lovers in Bucharest can add new experience in this European jazz portfolio. Mister Voicu Rădescu, as director and host of this event, could you offer us some details? How will the 9th edition of Green Hours Jazz Fest be?

We will have a fresh edition, even if it's the 9th one. The freshness comes form the new artists that will perform and from their value - they are artists of great value. At the same time, there will also be emerging artists - a mixture that we enjoy using here, in Green Hours. I will quickly remind some of the famous names that will be performing: John Greaves and Vincent Courtois. John Greaves - a 68-year-old guitarist, known in 70's music, he is an educated musician, he is a bass guitarist, but also a singer, a pianist and a lyric writer and will perform along with a well-known French cellist, Vincent Courtois. Another famous and consacrated figure, in his own country and in Europe as well, is Polish Pawl Kaczmarckyk, performing with his own Audiofeeling Trio. They have previously been invited to the 10th edition, but with a quartet that time. Back then, he was still an emerging young artist, but nowadays he is a well known Polish pianist and musician. We have artists coming from Norway, Helge Lien Trio and another trio, belonging to the drummer from Helge Lien himself, Per Oddvar Johansen - both Norwegian Grammy Award winners and considered famous, taking Scandinavian jazz to whole other musical levels.

I can see that you highly appreciate the Polish and the Norwegians. But you also intensly promote the new generations.

Precisely. I would like to talk to you about the new-comers. Safran from Germany, a band composed of young and very young people, whom I saw in Vilnius last year, during the local jazz festival. They are extraordinary talented and they will most likely be a surprise for the audience, for the people who listen to good music. In the new-comers' area, I will not avoid saying that we are organizing the concert for And Then This, which is actually a Romanian band. We're talking about Diana Miron on vocals and violin, Sian Brie on electric guitar, Laurenţiu Coţac on double bass, a great bass player, you rarely see something like this nowadays in Romania, and Daniel Stanciu on the no input mixer. The concert will be filled with experimental traits, but this will not push away the people that are accustomed to this type of music because they encompass melody into their tunes as well. In any case, they are very good. We will keep hearing their names in Romania and outside its borders.

There are two band that I haven't yet mentioned. First, Hanno Busch Trio (thus having two bands from Germany), a very dynamic group, a classic jazz trio, playing a very modern, quick, yet highly sensitive jazz. On the first day, after the Romanian band And Then This will be opening the festival, we will have a very interesting and peculiar duo, pianist Marcin Masecki and drummer Jerzy Rogiewicz, who will be playing ragtime. Thus, after the experimental program presented by And Then This, we will have a ragtime performance, 20's jazz brought to life in our current times.

I do urge the good music afficianados, and I do have to say this because there is a clear difference between good music and the rest of music, to come and satisfy their curiosity! People should always be driven by curiosity when it comes to seeing more, feeling more. We welcome you at Green Hours between the 25th and the 28th of May.

Tell us a bit about the Green Hours garden environment.

We call it the Green Hours garden because it's green and we like the idea of green and Eco. I honestly think that the environment is more than artistic and cultural, and at the same time bohemian and relaxing, and I think this reflects in the eyes of the people who come here. People will have the chance to attend a festival that won't look so mainstream, although the value of the artists is at a very high level, and the atmosphere is very relaxing (with a beer, a glass of juice or a cup of coffee in front of you).

Thank you! We do hope you have, as it is always the case, one of the most beautiful festivals in Bucharest.