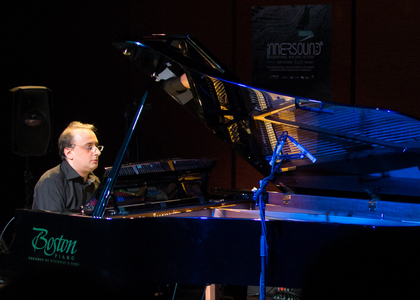 Thursday, 25 May 2017 , ora 10.03
Today, the 26th of May 2017, from 7 p.m at the 27th edition of the International New Music Week is going to take place the concert of the National Radio Orchestra led by conductor Cristian Oroşanu. The soloists of the evening are the violinist Diana Moş and the flutist Ion Bogdan Ştefănescu. In the programme there are also: Mandala with a Polyphony by Antonio Lotti by Aurel Stroe and two other pieces in absolute first audition - Concerto for Flute and Orchestra by Adrian Iorgulescu and Concerto for Violin and Orchestra by Mihai Măniceanu.

Tomorrow evening, during the International New Music Week is going to be interpreted in first audition the Concerto for Violin and Orchestra which you have finished not long ago, I assume. Can you tell us, roughly speaking, how does this composition look like?

The Concerto for Violin and Orchestra has certain rhapsodic inflections and some liberties which are related to its construction, obviously assumed. At the same time it unfolds its expressive horizon in the spirit of the conflictual antique meter principles, ternary-binary. The musical pattern is oscillating; sometimes lively, kinetic and other times quasi-improvised or feral. The soloist's line is in a heterophonic relationship with the orchestra's, being harmonic or dissonant towards the latter. The composition rests upon a symbolic sound, reference point for the genesis, evolution and reabsorption of the whole journey.

How did you come with the idea of violinist Diana Moș performing this piece with the National Radio Orchestra?

I have worked with violinist Diana Moș a few times before, both as a musician and as a composer, and I truly believe that she is one of the most important violinists in Romania; more so, she is an expert in contemporary music. The soloist's part is going to be extremely difficult but I am sure that Diana Moș will have an impeccable performance.

In the end, I would like to ask what other projects are there in the near future for you?

I have to finalize a composition for the George Enescu Festival, then, I should finish an ample orchestral composition demanded by The Union of Composers and Musicologists from Romania. I also have in mind a composition for Archaeus Assembly, some lieder for the duet Bianca - Remus Manoleanu….and related to any performances, in the first part of July I will perform in a concert next to SonoMania Assembly in Rome. In addition, I am working with soprano Veronica Anusca at a micro composition called Ornitoric by Nicolae Brânduș.