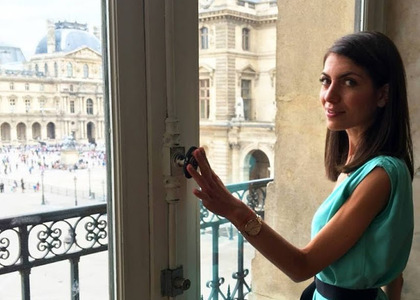 Interview with Simona Dordea, spokesperson for the Cluj Opera

Friday, 26 May 2017 , ora 10.05
Tonight, the Romanian National Opera of Cluj-Napoca is inviting the public to the national premiere of the ballet performance Zorba. We had Mrs. Simona Dordea - spokesperson for the Cluj Opera - talk to us about how this show came to be:

This is an exceptional show, with choreography by Graig Lorca Massine, who worked with Mikis Theodorakis, the equally celebrated composer, to create this Hellenic masterpiece. To this day, it has had 5000 performances on four different continents and now, on Friday, it will arrive in Cluj before a Romanian audience who is absolutely thrilled to discover this work.

What is the story of the show?

The story was inspired by the novel of the same name. It preserves the classical nuance of the Greek's story in an interesting manner through the choreography and everything else that ballet can bring to it, the orchestra, and the opera choir. All of these elements come together to create the story of the Greek's encounter with his new American friend, John, who has just arrived in the bona fide Greek village. This is the convergence of opposing characteristics, of the rational with a character that stands for the joy of living, the delight he takes in every experience and the welcoming of every beautiful thing he comes across. The director's vision and the choreography as a whole are truly unique, in the sense that Graig Lorca Massine, who is joining us in Cluj for the final touches before the premiere, has put his mark on the piece, enriching both the score and the dance. There is a particular focus on the main characters, depicted in an original way, but also on the nation, that Hellenic spirit arising both from the encounter of the heroes and the prominence of the people, represented by the choir. This collective voice which in other shows gets lost or fades into the background is here brought to the forefront, in order to share this joy particular to the Greeks with the whole audience.