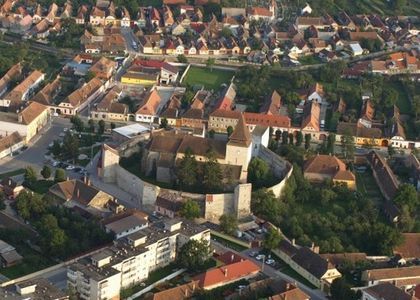 A new edition of the 'Musica Barcensis' Festival starts

Friday, 30 June 2017 , ora 8.53
The opening concert of the 'Musica Barcensis' Festival is performed at the Fortified Church in Cristian, the Brașov County, tomorrow, 1st July, 2017. The German Youth Orchestra of Bremen will be directed by Martin Lentz. We received more information about this year's events from the organist Steffen Schlandt, the director of the festival and the chairman of the Forumarte Foundation that organizes the event.

All the events of the 8th edition of the 'Musica Barcensis' Festival have been scheduled from 1st July until the end of August. How will these almost two months of music look like and what are this edition's novelties in comparison to the previous editions?

The 'Musica Barcensis' Festival will present concerts in the churches of Ţara Bârsei, which will take place during all the July and August weekends. This year we will have 18 concerts with international performers from over 5 countries, and we have 220 musicians from duets to vocal-instrumental ensembles of over 40-50 people.

The debut of the Festival will be today with the Bremen Youth Orchestra, which will perform at the Fortified Church in Cristian, a programme full of substance, in two parts, including Symphony No. 5 by Dvorak - a very ambitious programme for young musicians. We are very happy that they will open this festival.

The Braşov Cycling Association will be also present. We have intended from the festival's debut to include cycling as a means of transportation to these churches.

In July and August there will be two churches where several concerts will be held, namely, the Bartholomew Church and the Church of Prejmer. There will be performed four concerts, while during the rest of the festival days, we will have another destination each day, namely, Codlea, Sânpetru, Ghimbav, Hărman, Râşnov, Hălchiu, Vulcan and St. Martin's Church.
As to the repertoire ... the first musical works will be from the XVth century and we have also included contemporary music.

The ensembles that participate in the Festival, are either from the County of Braşov and the whole of Romania, or guests from Holland, Italy, Switzerland and Germany. We will have Romanian ensembles, such as, The Chamber Music Project from Bucharest and Alpha Duo from Italy, the Rhapsody Vocal Trio from Switzerland, then the Würzburg Vocal Ensemble from Germany and the Cantate Domino ensemble. One of the main events of the festival will be a trip to Ţara Bârsei, on the footsteps of organist Michael Schuster, a trip during which there will be read some of the memories from the diary of this nineteenth-century organist, memories that will be linked to different churches, so that the audience will live through his experiences.