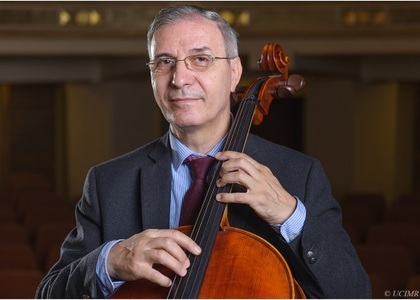 Monday, 10 July 2017 , ora 11.17
The second concert from the "Magic Summer" International Festival is at its sixth edition in 2017 and will be performed by Romanian Youth Orchestra conducted by Cristian Mandeal and the soloists of the evening will be the members from the Wave Quartet. The cello player, Marin Cazacu, who is also the manager of the Romanian Youth Orchestra invites us to this concert.

Wednesday, 12 July 2017 at 19.30 PM at the Romanian Athenaeum will take place one of the most spectacular concerts which Romanian Orchestra performs in Romania. Concert`s schedule is entirely unique because it includes two works for multi-percussion and symphonic orchestra, which I might add, create the most impressive emotions- like fireworks- a fortunate combination of colours and sounds between the percussion and symphony orchestra instruments with not just talented but extraordinary performers who won the international contests in Munchen, Germany whom now in Bucharest, Romania will prove us what means to perform at a percussion instrument not just to beat them. As I told you, the schedule also includes two works at first audition in Romania. The first one is Einojuhani Rautavaara, an outstanding and romantic Finnish composer who is a contemporary with Jean Sibelius and the second one is Avner Dorman, a composer from Israel who has an impressive career all over the world. In the second part of the schedule we will listen no more, no less than the most beautiful suite composed by Georges Bizet entitled Carmen this time with a special arrangement made by Rodion Scedrin for many percussion instruments- seven musicians to be more precise- and a various orchestra of string instruments in which the most beautiful themes made by Georges Bizet come forth in an original version, only as Scedrin could have created it for the ballet he composed for his wife, Maya Plisetskaya. Therefore, the Romanian Youth Orchestra will perform a very special concert at the Romania Athenaeum mark of Lanto Communication in "Magic Summer" Festival, Wednesday, 12 July 2017 at 19.30 PM.