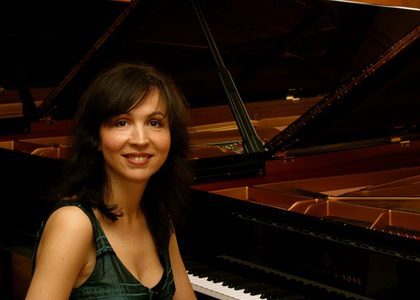 Pianist Luiza Borac will evoke Dinu Lipatti's personality, in an important piano festival in Italy. Here are details from the following interview:

Ms. Luiza Borac, on Sunday you will be part of the wide series of events called "Homage to Art. Pianistica di Arturo Benedetti Michelangeli". You will hold a concert at the Church of San Benedeto, a recital dedicated to Lipatti's memory. How did this idea arise?

It is a great joy to represent Dinu Lipatti's music at this festival and as you have said, it honours the memory of one of the greatest pianists of all time - Arturo Benedetti Michelangeli. Celibidache used to call him "the greatest artist" and he is definitely the biggest Italian pianist after Ferruccio Busoni.

The concert takes place in the Val town di Rabbi. It's an important town ... it was for Michelangeli, anyway. That was the place where he used to retire after his concert tours and that is where he dedicated himself to his passion for composing musical pieces; he was very interested in the popular Piemontese music that he had heard in those places and he harmonized many of those folk songs. The festival is organized by the Centre in Brescia, the Michelangeni Centre; in Brescia it is where this great pianist was born; Brescia is the place where you can find a huge archive of documents referring to him, including many letters he had exchanged with Puccini, Cortot and the great Dinu Lipatti. Between the two composers there was mutual admiration and there was even the idea of a collaborative project, which unfortunately, it could not be done, as Dinu Lipatti died too early. This is why we had this idea of bringing these two big titans together in this concert, the idea of celebrating both at the Michelangeli Festival - a Dinu Lipatti concert.

And that's why you have chosen this repertoire, which includes opuses by Lipatti, Bach, Liszt and Rossini.

Absolutely. The first part of the concert will include works by Dinu Lipatti, his transcriptions after Bach and Albeniz, the Nocturnes in A Minor, in F Sharp Minor (dedicated to Clara Haskil), the Sonatina for the Left Hand for Piano and, in the second part, works by Franz Liszt and, being in Italy, a homage to composer Rossini.

What other projects do you have for the near future?

I'm glad I will perform a Chopin concert at the Chopin Society in Frankfurt in August. And, with great joy, I look forward to the "George Enescu" International Festival, where I will have the great honour of interpreting the Concerto for Piano and Orchestra by Valentin Gheorghiu, an exceptional work I am already working on together with the maestro. I'm waiting for the audience to attend these two events - 21st September in Timisoara and 23rd September in Bucharest - so we could enjoy together this extraordinary music composed by Valentin Gheorghiu.