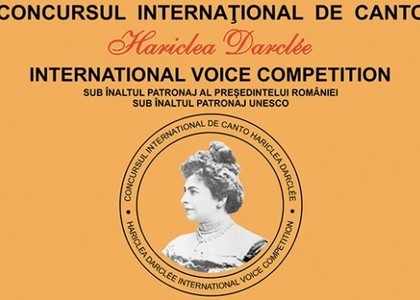 Soprano Mariana Nicolesco was kind enough to tell us about the events that will take place starting from 25th July to 6th August in Brăila:

Two hundred young talents whom eighty are from China, will meet at this wonderful event called International Singing Competition and Festival dedicated in the memory of soprano Hariclea Darclee between 25th July and 6th August.

The title of UNESCO Artist for Peace which was given to me finds the justification once more through the presence of so much talented people in the domain of lyrics from eighteen world countries. It also confirms my belief that nothing can bring people more near than singing.

An extraordinary appreciation of this festival and contest comes from Josef Hussek, last director of Salzburg Festival: "I don`t know another singing competition that could match its moments and manifestations at such a high level than the one dedicated to Hariclea Darclee. This event is much more than an ordinary singing competition because it is also a Competition, Master Class and a true Music Festival. That`s what makes it incomparable and unique."

Not less than 2500 artists from 50 countries and 5 continents participated starting from 1995 at Darclee Competition and Festival and also to the Master Classes offered by myself in the years between an edition to another of the Competition.

'Hariclea Darclee' International Singing Competition and Festival from Brăila, edition 2017, will begin on 25th July with the festive opening and the inaugural concert performed by the winners of the First Prize and the Darclee Grand Prize- soprano Silvia Micu and tenor Ioan Hotea, accompanied at piano by Alexandru Petrovici.

In parallel with the singing competition we will assist on 29th July at the video projection conference made by the musicologist and phoniatric doctor Stephan Poen on the theme "About the Glory of Music Once More: Homage to Nicolae Herlea at 90 Years since his Birth."

On the 3rd of August we will applaud the grand pianist Matei Varga, that specially arrived from New York in order to celebrate with us Dinu Lipatti`s Centennial.

On the 4th August will take place the representation with Pagliacci by Leoncavallo, an opera in which triumphed on the stages of the world Hariclea Darclee, Nicolae Herlea and myself at Metropolitan Opera from New York, in the magnificent performance signed by Franco Zefirelli.

On the 5th August, in the presence of 10.000-15.000 spectators takes place on the Danube Esplanade the traditional Extraordinary Concert where take part the laureates of the Darclee Competition with the participation of George Enescu Philharmonic Choir and Darclee Festival Orchestra conducted by maestro Marco Balderi.

We thank all those who made possible this triumph and sensational success of the Darclee Festival and Competition.