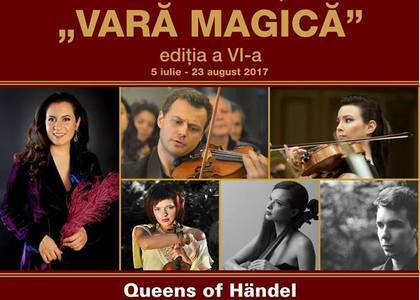 An Interview with Soprano Rodica Vică

International Festival "Magic Summer" takes place at the Romanian Athenaeum on the 26th July which is the fourth concert of the sixth edition. Soprano Rodica Vică and I Ludici Ensemble presents a concert with Handel`s music. We found out details from the soloist herself:

Rodica Vică, on Wednesday you will have a concert during the "Magic Summer" Festival with I Ludici Ensemble- a concert with baroque music. How did the idea of this project camed out?

The idea of this project came during a scientific research for my PhD thesis, which later developed and we hope it ends well on Wednesday, in a painting on a 300 years old canvas. The idea is based on the Handelian feminine roles that are the base of Georg Friedrich Handel`s creation and dramaturgy.

What`s different at Handel`s vocal music than any other baroque composer`s music?

I cannot tell that is different but I could say that is from my point of view a complex type of music that offers a lot of freedom and it still offers a clear guiding from the technical and approach point of view and allows you to experiment a lot of colours.

You will sing along with I Ludici Ensemble. How is the collaboration with these musicians?

We are collaborating for over an year now. All five of them- Rafael Butaru, Iulia Zmeu, Cătălina Filipescu, Iulian Ochescu and Ella Bokor- are passionate about the baroque music which made our collaboration a lot easier because I didn`t had to suggest them anything. They came with a lot of ideas and this leads to a very pleasant collaboration.