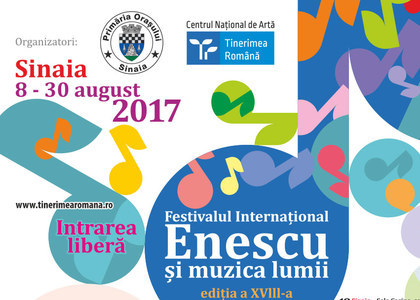 The beginning of the 18th edition of the 'Enescu and the music of the world' International Festival. An interview with Marin Cazacu, the organizer of the even

The "Enescu and the music of the world" International Festival will be taking place this year between the 8th and the 30th of August and it sums up a number of no less than 18 events, the main ones being hosted by the Casino Hall in Sinaia. With this occasion, one could listen to over 300 Romanian and foreign musicians. Here to give us more pieces of information is the artistic director of the festival, cellist Marin Cazacu.

Largely speaking, how does the programme look?

Being at its 18th edition, I have to confess that this is quite a performance, we've reached our maturity. It was conceived as a youth festival, but not only, because along young musicians we can also see great celebrities, remarkable for both Romanian and international musical life. And this year, the national Romanian youth orchestras, the three of them: the Romanian Youth Orchestra, the Romanian Sinfonietta Orchestra and the Junior Orchestra, all for different ages, will be the protagonists, because even in the preparation period, they will be going to several locations in the city of Sinaia. These youngsters take part in the most important preparation stage, of collective creativity, as an orchestral ensemble is known. This year, we have invited the National Youth Orchestra from the Netherlands, and the established artists that are preparing these orchestras are, as I've mentioned in the beginning, great personalities from the Romanian and international musical life. Maestro Cristian Mandeal, who for the past ten years has dedicated himself in full to training the Romanian Youth Orchestra, will be once again present at Sinaia. Also, maestro Horia Andrescu will also be present at Sinaia, along with the Romanian Sinfonietta, and the youngest orchestra is prepared by the young conductor Gabriel Bebeşelea. Furthermore, the National Youth Orchestra from the Netherlands has the famous English conductor Mark Wigglesworth as its protagonist. And among the soloists who will be presented on the concert stages in Sinaia, we have the great lady Elisabeth Leonskaja, who will be for the third time in this city. It means a great deal and an extraordinary honor for us. We will also see maestro Valentin Gheorghiu, a legend of Romanian music. I will also mention violinist Liviu Prunaru, concert maestro for the Concertgebouw Orchestra in Amsterdam, the Dutch violinist Simone Lamsma, and on the cello, I will be performing along with Ştefan Cazacu. We have very few pianists, such as Adela Liculescu or Cristian Sandrin.

Apart from the Casino of Sinaia, we will also be performing at Carmen Silva Cultural Center, at the Catholic Church, at the Sinaia City Museum and, of course, in the Sinaia city park.

Over 300 young people will be in Sinaia, making the city become the youngest and most musical city of Romania between the 8th and the 30th of August.