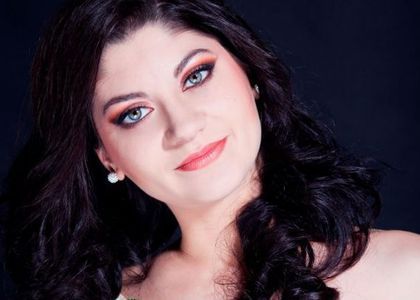 Monday, 7 August 2017 , ora 13.07
A canto teacher at the "Vespasian Lungu" Folk Arts School in Brăila and first soloist of the "Nae Leonard" Theatre in Galaţi, mezzo-soprano Florentina Soare, born in Brăila, has become one of the winners of the 2017 "Hariclea Darclée" Great Prize. Florentina Soare was among the laureates of this competition in 2015 when she won the 2nd Prize. On the second place, she was also at the National Romanian Lied Competition in 2016 - a competition initiated by soprano Mariana Nicolesco who also organized the "Hariclea Darclée" International Festival and Competition. Internationally, Florentina Soare has already collaborated with the Theatre in Magdeburg, Germany, where she performed the role of Ramiro in Mozart's opera "La finta giardiniera". This year, the "Hariclea Darclée" Grand Prix was granted ex aequo to the Brazilian soprano Ludmila Bauerfeldt and the Romanian mezzo-soprano Florentina Soare.

Until this hour, only the mezzosoprano Florentina Soare has responded to our request, giving us some of her impressions:

Florentina Soare, congratulations for the "Hariclea Darclée" Grand Prix! How do you feel and what does this triumph mean to you?

It is hard to say ... It is my greatest achievement at this moment, the most beautiful dream that could have happened to me, which I honestly did not expect.

What were the most difficult moments in the competition?

Last night; the awards night. The waiting was unbearable, if I can say so. I had not hoped to get there and I did not think I was currently fit to this prize; as last night's gala was also a competition night, the level was very high and I had to present myself at the highest professional level.

What was the level of competition?

It was a very high level; and until this year it has never been this high, as Mrs. Nicolesco said. All the contestants were very, very well prepared, some gorgeous voices, and I suppose that it was too hard for the jury to choose.

Winning this competition surely offers you more opportunities to opera theatres. What future projects do you have?

You are correct. I was already offered many opportunities two years ago when I first participated in this competition. I have a contract with the theatre in Magdeburg, Germany, with which I will collaborate the next season; and I hope others will also come.

In this edition the Grand Prize was granted ex aequo. You share it with a soprano from Brazil - Ludmila Bauerfeldt.

How is this soprano?

Firstly, she's a very good colleague. A wonderful voice. A talent, I would say. I'm glad we met and we had the opportunity to be on the same stage and enjoy the same prize.