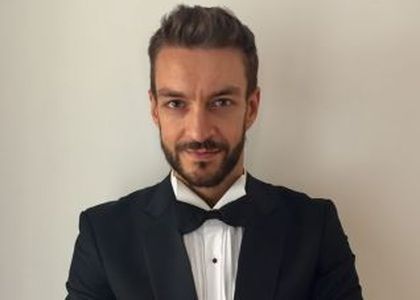 Thursday, 24 August 2017 , ora 11.14
The first preview of the performance of "Don Giovanni", composed by Wolfgang Amadeus Mozart, can be seen on Friday, the 25thof August 2017, on the stage of the Bucharest National Opera, starting at 6 PM. It is directed and decorated by Andrei Şerban, and one of the lyrical artists included in this project is Andrei Lazăr.

You bring to life the character of "Don Ottavio" from the spectacle of Don Giovanni,
a premiere signed by director Andrei Şerban, performed on the stage of the Bucharest National Opera. What did the preparations for this role demand?

First of all, I need to say that working with a director of such importance and witch such a brilliant career such as mister Andrei Şerban is a highly pleasant opportunity for any lyrical artist. It was a challenge that has started ever since May. We practiced intensely. At first, at the musical cabin, then I have unraveled the character and discussed with mister Şerban about each and every valency, about every psychological trait of our characters. We transformed Don Ottavio from a dull character into a strong one, with well-established political connections, and having a rather difficult relationship with his fiancée, Donna Anna.

How would you describe Andrei Şerban's vision for this performance?

It is extremely modern. It will have a huge impact on the audience. I'm absolutely sure about it. He doesn't treat the opera in the same manner that the Romanian audience is used to. It is an approach that's very close to dramatic theater. The characters are very well crafted and inner-built. They are overwhelmed with numerous contradicting feelings. They have strong, antagonistic relationships that lead to highly colorful and well-aspected characters.

We are talking about a performance with four preview shows and two premiers that include an impressive suite of soloists. During rehearsals, how did you communicate with them?

Rather well and cursive. Mister Şerban highly insisted that we work in all possible combinations. Even if the public will only witness two separate distributions, in the past three months of rehearsals, we have been permanently working on all possible combinations. In any combination we would perform, we are well acquainted with one another. We are young artists and we wish, under the guidance of mister Şerban, to bring a fresh spirit into the world of opera. There are talented artists, both collaborators for the National Opera, and employed artists.

I would like us to step away from the Don Giovanni spectacle for a moment, and talk about your career. At the end of June, you became the interim director of the "Stela Popescu" Musical Theater. What sort of projects are you preparing, given your new role?

Truly speaking, it is a different role. It is a challenge for a lyrical artist, such as myself, to become the interim manager of a public cultural institution. With our new managerial team, we intend to bring a whole new spirit to this institution. Our plans mostly include the production of musical theater, highly focusing on the musical genre, which is rarely approached in Bucharest, or in Romania, for that matter. Besides replaying the last season of spectacles, we have in store a new premiere in October, a children's story, which will be directed by young Toni Adam. In November, we have a production of "The Moon", by Carl Orff, a chamber opera, which will be given a new script by director Dan Tudor, the scenography belonging to Corina Grămoşteanu. In December, we are preparing a well-known musical from 80's Great Britain, entitled Footloose, a musical by Kenny Loogins. It will be a co-production between our theater and a young association of actors from the private sector.