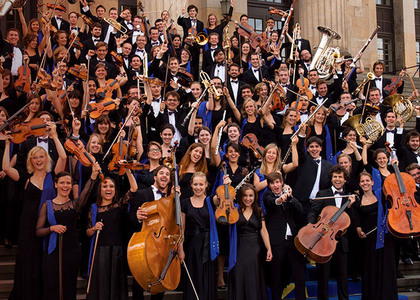 Young Romanian Musicians between the ages of 16-26 are invited by the Romanian Cultural Institute and Artexim to participate at the annual selection for the European Union Youth Orchestra (EUYO). The auditions are going to take place of the 11th of November 2017 in Bucharest and the registration deadline is the 23rd of October 2017. Alexandru Mija, the assistant manager of the orchestra, gave us more information in the following interview.

I would like to ask you how would you generally describe this orchestra and what benefits do you consider that a young Romanian musician would have as a result of taking part in this project.

If I could synthesize, I would call it a genuine school for young musicians from all over Europe. It is a school and an opportunity at the same time, because, statistically speaking, 80% of the instrumentalists of the greatest European orchestras were part of the European Union Youth Orchestra. The active young Romanian instrumentalists of this orchestra have the chance to benefit from preparation stages leaded by teachers from all over Europe, which take place along the two great tours that we organize during the year. Then, at the same time, it is a school because the young musicians have the chance to interpret and sing under the baton of some great conductors; I must only mention that the main conductor of the orchestra is Vasily Petrenko. For example, this year we are going to sing with the same Vasily Petrenko, but also with two other important conductors, Gianandrea Noseda and Manfred Honeck. It is a significant chance for young artists as they have the opportunity to sing in great cultural and musical European centers and in this way they have the chance to be seen and followed closely upon by outstanding personalities as concerns a future career opportunity.

I would like to talk a bit about the very moment of the selection. How does the audition take place exactly? What are the criteria? Who does the evaluation? And what is most of all expected from the candidate?