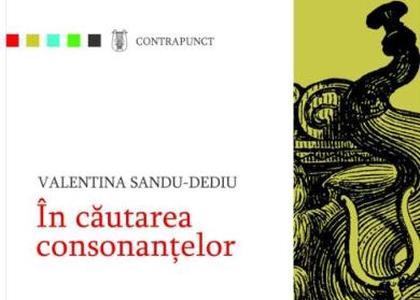 The latest volume signed by musicologist Valentina Sandu-Dediu was released this year by the Humanitas Publishing House and has already been among the best-selling five books at the publisher's booth during the Enescu Festival (as shown by the statistics published by the representatives of the publishing house on social networks). The official launch will take place on October 14, starting at 17:00, at the Humanitas Cismigiu Bookstore and will be followed by an autograph session. We will find out more about the content of the volume, but also about the author's future projects in the next interview.

Humanitas Publishing House has just released the latest volume signed by you, "Looking for Consonances". What made you decide upon this title?

At first I thought, after joking about the previous volume I published, also with Humanitas - "Parallel Octaves" - so back them I joked with Mr. Dan Buciu, who was my theory and harmony professor, that I should also publish a volume titled parallel words, not only parallel octaves. But, of course, I still thought of another title for this volume, which, in its structure, somehow resembles the "parallel octaves" in the sense that it is a suite of essays, articles, studies, some of which are more applied musicologically, others rather intended for a wider audience. And one volume and the other ends with smaller articles, small portraits of musical personalities that have been close to me, either downright or as affinities. But here is where the similarities stop, and I admit that I also thought of a title in the field of music theory. Dissonance and consonance are concepts that can be applied metaphorically. Actually, I thought about it, and I noticed that by gathering these essays and articles, consonance and dissonance - for you cannot have one without the other - somehow intersect with most of the texts.

In fact, this volume does not doesn't talk much about dissonance and consonance, perhaps only in a study of music by Anatol Vieru and Tiberiu Olah.

The volume is structured in three major sections and I will invite you to tell us, in broad terms, what topics each section addresses.

In the first section I gathered together several texts on various aspects of music history, from we see Mozart today, to how we see historical interpretation today. And not only that, as I also approached Romanian music, Wilhelm Georg Berger, for example, as I was saying... Vieru and Olah; Stroe also appears in various instances. But they are not portraits of the composer, there are some themes that I have been preoccupied with over the last few years and which, I admit, have sometimes been themes from symposiums I have attended. Let's say... the protest in music; if there is such a thing.

In the second section I actually worked on an article that I wrote for a German lexicon which was very useful for me since I learned a lot of things about the new music from all over Europe's former communist area and not only Europe, but also of the Caucasus. It is a lexicon that focuses on the theme of new music, on post-war music, and it also looks at it from the point of view of ideologies, so the Western avant-garde and the communist eastern socialist realism.

Finally, the last part... are those portraits that have been very dear and close to me and which I have written for various reasons. I marked the departure of Pierre Boulez, even if he is not one of my favorite composers, but no one can deny his impact on the music of the 20th century. I talked there about Helmut Loos, about Alexander Leahu or Dan Buciu and many other musicians who made an impression upon me at some point.

The official launch of the book will take place in less than a week at the Humanitas Cismigiu Bookstore. Can you tell us the names of the speakers, if there are any?

I insisted on having the two guests that will participate in the launch, I hope that I have indeed found the most favourable time and date; it will be on Saturday, the 14th of October, and I will be joined by the writer Ioana Pârvulescu and the conductor Tiberiu Soare.

Although not yet officially released, the volume was among the best-selling books at the Humanitas stand at the Enescu Festival. What were your thoughts upon hearing this?

Obviously my thoughts were of great joy, but I think here is the merit of, first of all, the management of the publishing house because they naturally thought that an editorial novelty related to music themes should be included in the Humanitas stand at the Palace Hall, for example, and not only there, but in all the places where the Enescu Festival took place. The book was at the fingertips of music lovers, and it was probably easier to access. I, for one, was definitely delighted.

And, as a final question, what are you working on presently?

I'm thinking about a bigger project - I've otherwise already started working on it, on a real book. This would be a compact volume, not made up of more or less disparate segments, and which will probably focus on the idea of nationalism in music, with a strong emphasis on Romanian music, but starting from various forms of nationalism, especially those of the 20th century in German, French, and Soviet music and more.