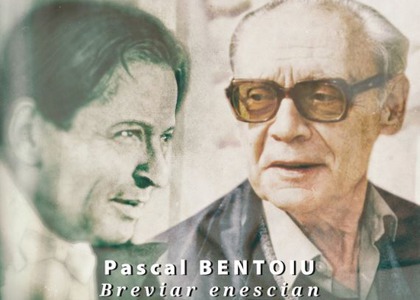 Tuesday, 17 October 2017 , ora 11.22
Tiberiu Comandașu: This September, while the "George Enescu" Festival was still in progress, Radio House Publishing brought out a volume dedicated to any highbrow who wishes either to discover or understand better George Enescu's work and personality. The composer and musicologist Pascal Bentoiu, an ingenious interpreter of Enescu's opuses as well as orchestrator of some of his valuable unfinished work, summarized in "Synopsis about Enescu" the great Romanian composer's work from opus 1 to opus 33, also including some other pieces that remained unmarked.

The collection of registered reviews aired during the course of 31 weekly broadcasts at Radio Romania Music under the title "2005 - George Enescu's year", between February the 1st and August the 30th, 2005.

Ioana Bentoiu, the daughter of the late Pascal Bentoiu, about the bond between George Enescu and her father: I would say that the relationship between Pascal Bentoiu and George Enescu was based on love. From the first Enescu Festival my father attended, he had been so charmed by the musical personality that Enescu expressed - a composer he had known before only as a violinist or conductor or composer of the Rhapsodies and the Romanian Poem… so, the discovery he made about all the other major works of Enescu was a deep emotional shock for my father. Father's compositions were not really influenced by Enescu as he had been Jora's disciple, who had been himself the student of some German composers, Teichmuller and Reger.

They bonded tardily, but their relationship was absolute and the moment when father stopped writing his own music he dedicated himself to the unfinished pieces belonging to Enescu (The Fourth Symphony, The Fifth Symphony, The Symphonic Poem Isis), which he completed and orchestrated based on other complete and partial projects of Enescu. They were the object of my father's work for some time… for about ten years father dedicated his time to Enescu.

It had been such an important bond also because father had reached a degree of compositional maturity so great that he wrote even without touching the piano. He stood with his back hunched and wrote in an armchair that we still have and hold dear. And in this armchair he finished the plans for Enescu's masterpieces. We, that is me and my family, all had in mind the image of my father who stood all day with a pencil in his hand and a music sheet on his lap and… I have to admit that he had been blessed with some extraordinary eyes because to look over Enescu's plans which were (most of them) illegible would have been really difficult for anyone except father. Still, he was in some sort of trance… yes, I would say that he was under a spell. If you entered the room and told father to come to dinner, at first he would just vaguely look towards you and after that… he would never get mad when he was interrupted and he would say "yes, all right". He would put aside the score and the pencil and come to eat, and he seemed a different man and after that he would get into the same trance and write on. And that is how some years went by.

"In some way, The Village Suite and The Childhood Impressions seem linked. They are both an attempt to retrace and remember the long lost childhood. But, while the Orchestral Suite adopts the actual state of the subject as its outlook - which means that everything is seen and judged through the eyes of a grown-up -, The Impressions are mostly trying to retrace the open-mindedness and mentality of the child himself. We are witnesses of an emotional recall of the things and surroundings perceived from the emotional and sensuous level of a little, clever and sensitive human being living a day of his life.

Tiberiu Comandașu: As a musical editor at Radio Romania, one of the greatest satisfactions is meeting exceptional people. Possibly the greatest joy I had when I met Pascal Bentoiu, whose voice you have just heard talking about George Enescu's Suite, Childhood Impressions.

I visited him for seven months in order to record his presentations about Enescu's opuses. On these occasions I appreciated his impressive professional qualities, as well as those features worthy of a role model, such as deepthinking, an impressive culture not only in the music field but in all arts, honest modesty and an authentic kindness which was, at first, shadowed by a mere severity that was actually only his reluctance towards compromise.

And now, 12 years after that series of broadcasts we meet again with Pascal Bentoiu in the volume 'Synopsis about Enescu' edited at the Radio House. A book with four CDs containing Pascal Bentoiu's reviews spoken and transcribed by himself, as well as the English version of the text. A worthy collection - accessible and captivating - of Enescu's world.

Ioana Bentoiu talks about how Pascal Bentoiu looked on Radio Romania Music's invitation to host the broadcasts in 2005.

Ioana Bentoiu: I clearly remember that Enescu's masterpieces were not a project that anyone could have read. Both me and mother told father about it and we suggested that he should make it a little easier to understand for the intellectual man that is not necessarily a musician, but interested in Enescu's music. Then father embraced the idea and he was very glad. Whenever he would come from a recording he would happily admit that it was great that he could talk in a simple manner. He could not really stand the basic musical language; it seemed to him something really difficult and it was not at all his kind, so he spoke only normal words and he was glad, he was happy. This way, he was still linked to Enescu and he was able to introduce the great composer to the world in a simpler, more evident manner, available to all sorts of people who otherwise could not have read Enescu's masterpieces.