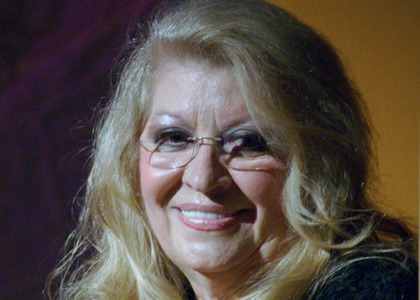 Interview with Soprano Silvia Voinea at Her Anniversary

She was born on 1st November, exactly on the day when the National Radio is celebrated: "Delicate, refined, but also intelligent, demanding and charaterised by a sharp sense of self-criticism." - these qualities were attributed by the chroniclers to Silvia Voinea, the artist who on Wednesday, 1st November, celebrates her 75th anniversary. She was a star of the operatic stage for three decades, with a career she started with the role of Yniold in Pelléas and Mélisande by Claude Debussy and ended with Ofelia in Hamlet by Pascal Bentoiu. In the history of Romanian lyricism, Silvia Voinea is the only coloratura soprano who for 20 years, during the same season, performed the three major roles for her type of voice, namely: Lakme, Lucia di Lammermoor and the Queen of the Night. Since 1990, Silvia Voinea has shared the secrets of her singing art with her students at the National University of Music Bucharest. She will celebrate her birthday together with her former and current students in an Anniversary Concert at the "George Enescu" Hall at the National University of Music Bucharest, an event she talked to us about in the following interview:

Dear Mrs. Silvia Voinea, first of all, will you please allow me to wish you Happy Birthday! 1st November is also the National Radio Day. Would you recollect any of the past events you might have had in connection to the Romanian Broadcasting?

Yes, ever since I was a child, I have celebrated my anniversary together with the Romanian Radio, because I was a member of the Children's Radio Choir - I used to be the soloist of the Children's Radio Choir - and I have always
celebrated my birthday like this, as if it had been a karmic encounter with the radio ... I also wish you, on my behalf, Happy Birthday! and many beautiful performances that will contribute to the education of the young generation and will enable Romanian culture be at the highest place where it has always been!

I think you should know that we have already wished you Happy Birthday! on 31st October, during the "Opera and Its Stars" section within the "Arpeggio" show.

Thank you very much.

How do you feel at this age? Would you allow me to disclose your age?

I feel blessed and this is not a secret to me; I feel blessed because, there, I was born in one century, and I will depart from this world in another century. I was born in the 20th century and I will leave in the 21st century. I have had a beautiful and full life, a beautiful career and now I am currently teaching the students at the National University of Music Bucharest, trying not only to cultivate the love for the art of singing in my students, but, yes, also to share with them my knowledge and to somehow pass on the torch to them, and everything so, with much love and enriched by the experience I gained in so many years of career.

Dear lady, you are 75 years old and you are full of energy, and I think this energy comes from the enthusiasm with which you share your vocal art with your students. When did you feel fully accomplished: when you were at the peak of your success on the stage or when your students proved their skills?

I felt fulfilled years ago when this moment arrived in my career, and now I feel the same, as a continuation, due to my students. The joy of shaping the human voice, of getting it to a high level and of seeing them perform on important world stages, is a joy that fulfills me, as well. It is a kind of rejuvenation through the joy that they give me with their art. It means that what I planted has made fruit; it's like a seed that got its fruit, and that's what makes me very happy... the tradition of Romanian lyrical art is passed on, and that again is a reason of great happiness for me, because we are a small country, with a very, very great tradition. I, through my canto maestro, Mrs. Viorica Teişanu, took over Elena Teodorini's singing school and tradition, who, let's not forget, was the first Romanian singer at the Scala di Milano; she had the first international singing school in Buenos Aires. No other country has achieved this level of success, namely, to have, in Italy alone, for example, 400 Romanian performers in prime roles on the big stages. No other country, whatever its size, has achieved this level; allow me to be proud of this and allow me to be happy!

Let's also tell our listeners that on 1st November you celebrate your birthday together with your current and former students, in an anniversary concert at the National University of Music Bucharest. Could you give us some details?

Yes, of course, I could. I thought it was appropriate to unite them as the rivers flow together, to unite those who graduated and those who are still in the country and who are available and have no other performance that evening, former students who now sing on the stage of the Bucharest Opera, of the Bucharest Operetta and at the other theatres in the country, in Cluj, Galati, Constanta ... or on international stages. That evening, there will be next to me, students celebrating their art of singing in performances on big stages both abroad and in the country; and, surely now, I have united with them, also the students I have in my canto class. It will be a kind of meeting between generations, because the experienced ones
will always have to sing alongwith the younger ones. This is the only way to pass the torch. The younger ones are still learning on stage, the sacred fire of creation and they are learning from those who are more experienced. I do not wish to call them 'the older people', because it is not elegant; all those who are on stage are young and there is no old age ... . Old age is a ... how shall I put it ... a condition each one lives through differently. If you are no longer useful and you cannot be useful, then and only then, you are old. But if God still endows you with your intellect, physical strength and energy, and you can still be of help to those around you which means you are still young.

Dear lady, I wish you again, Happy Birthday, plenty of strength to work, a long life and as many achievements in teaching your students as possible.

Thank you. We are looking forward to attending the concert that will bring many surprises, many, many famous areas and, at the same time, demonstrations of how one could be a singer, an actor and a dancer, all in one. We are waiting for you at the "George Enescu" Hall at the National University of Music at 18:00.