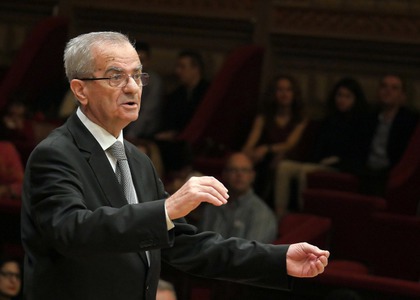 Interview with Voicu Enăchescu, founder and conductor of the 'Preludiu' Chamber Choir

With the occasion of the 45th anniversary of the choir's activity, maestro Voicu Enăchescu was the guest of the week at the Perpetuum Mobile show on Monday, October 30th

Along with me - maestro Voicu Enăchescu, the conductor and founder of the "Preludiu" Chamber Choir. Let me call you the parent of this band and ask you what your child looks like at almost 45 years of age.

Of course I could consider myself the father… The "Preludiu" Choir was born in 1972 at the Cultural House of Students in Bucharest. How do I feel after 45 years of activity? I confess that I feel professionally fulfilled and I think that from the beginning of the choir until now I even managed to transmit the love for choral music to those I worked with.

You said in the interview-book, written together with musicologist Grigore Constantinescu - Dialogues about Prelude - that the essence of your choir is the pleasure to sing. Has this essence remained?

Yes, it is very true. I never lied, especially in the discussions I had with Grigore Constantinescu, and I like to believe that this essence of the pleasure of singing was kept in all the current members of the "Preludiu" choir, because the working atmosphere the rehearsal is one of a more than friendly one, it is a ... how to put it ... a flow that I have been trying to convey over the years and it seems that until today I have succeeded in doing so. The current choir members of the "Preludiu" Choir, which over time has turned from an artistic band of student amateurs to a professional choir... it is still the pleasure of singing in choir; which does me a world of good, and I think the results we have achieved over time are also due to this desire the choir members have to sing and get closer to choral music.

What does The "Preludiu" Choir represent to you? A musical instrument, a second family or both one and the other?

Well, it was a second family from the beginning, obviously. Although, if we look at the calendar, it was originally the first family because, marrying much later, the second family, the soul, became indisputably the first in the order of the affection I had to manifest over my own family.

The guest of the week on Perpetuum Mobile is maestro Voicu Enăchescu, conductor of the "Preludiu" Chamber Choir.

From the perspective of a man who is perpetually in love with choral music, maestro, please tell us when was it more difficult for you? Then or now? I am referring to the context in which you needed and still need to carry out your activity.

I have to tell you that it has never been difficult for me, because I have done it with great pleasure, with great passion that I believe has been transmitted to me by some of my predecessors and I refer to the conductor of the Radio Children's Choir in which I sang in the years of my childhood, obviously - Ion Vanica and then Nicolae Ciobanu, conductor of the University Choir, where I also started.

Returning to Dialogues for Prelude. You said there, referring to the generations of choristers that have passed through here, that you were carrying out a sisyphic task. "It was my curse, so to speak, I had to take it from the beginning every time." What did you look for every time you selected your collaborators?

I think I tried to compliment myself when I said it was hard for me. It has never been hard for me, and now I can confirm this with a hand on my heart, but there were moments, especially at the beginning of the season, when the generations were changing. Every year there were younger people in the "Preludiu" Choir, and I had to start the entire work from the beginning ... the artistic work, that's what I'm talking about. But, gradually, they settled in and managed to fit into "Preludiu" Choir working atmosphere. Young people, that's what I meant when I said I worked like Sisyphus.

45 years in numbers means more than 350 radio-TV recordings, over 2500 concerts on stage in Romania and abroad, more than 90 tours in 30 countries in Europe, America, Asia, and several awards at national and international festivals. What do you wish would remain in the memory of the audience besides this track record?

We arrive at the Atheneum concert on November 1st. What should the audience attending this event expect?

So, another event full of artistic emotion by Voicu Enăchescu and the "Preludiu" Choir. I wish you and your colleagues will continue to offer moments such as this one to those who are listening to you for many years to come. Thank you!