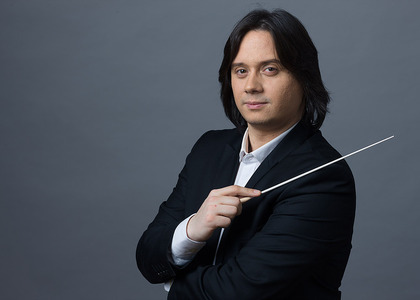 With the occasion of Romania's National Day, at Musikverein in Vienna, on Thursday, the 30th of December 2017, a concert will be held by the "Transilvania" Philharmonic Orchestra from Cluj-Napoca, with the pianist Alexandra Dariescu as a soloist. The conductor will be Gabriel Bebeşelea, who has given us details about this event:

Mr Gabriel Bebeşelea, you will conduct the Cluj-Napoca Philharmonic Orchestra at Musikverein. How did you come upon the opportunity to hold a concert at this renowned hall in Vienna?

It is the first concert of a Romanian orchestra at Musikverein since 1961. Before this, there was the Bucharest Philharmonic, in 1941 and 1961. The opportunity for this concert arose at the initiative of the Romanian Cultural Institute, to celebrate the National Day in this context.

For the concert on the 30th of December you have chosen Romanian works, but also Grieg's Concerto. How did you come up with the structure of this programme?

The programme is strongly connected to the first concert of the Bucharest Philharmonic, in 1941, when Dinu Lipatti was the soloist and they played his Concertino in classical style. We will interpret this work and his favourite piano concerto, Grieg's Piano Concerto. In the second part, we will interpret a less known work, George Enescu's Pastorale-Fantaisie, and we will conclude with Enescu's Symphony No. 1.

How would you describe your collaboration with Alexandra Dariescu?

It is a collaboration full of fantasy and I cherish each time I collaborate with Alexandra Dariescu, because it is an exchange of ideas that is very beneficial both to the orchestra and to the two performers. It gladdens me that she accepted the invitation and I already have a concert with the same programme in Cluj, which has been a success and it will surely be one in Vienna too.

What projects d after the concert at Musikverein?