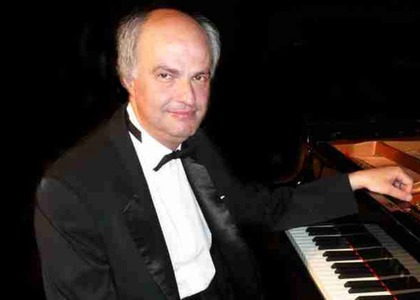 A chamber concert dedicated to the centenarian Dinu Lipatti takes place today, 11th of December 2017, at Zurich University of Arts. Among the protagonists of the event there is the pianist Viniciu Moroianu, who gave us more details in the following interview.

On the 11th of December you are going to take part in a concert which takes place in Switzerland and which is dedicated exclusively to the music of Dinu Lipatti. Could you tell us the story of this initiative?

It is a beautiful and dear event planned a few months ago. The initiator is a former student of mine, Ana Cristina Silvestru, who has a flourishing career on stage in Switzerland and Germany. She has managed to obtain the concert hall of the Music Conservatory of Zurich University of Arts for a concert dedicated exclusively to Lipatti's creation, which I consider a very important cultural fact, inclusively through the note of the event. The concert will comprise all of Dinu Lipatti's songs, nine in total, grouped in two cycles. Also, there will be permormed Aubade for Woodwind Quartet, a late work of Lipatti. The program will be completed with Fantasy for Piano op. 8, a work that I will sing, a sublime work which lasts half an hour, a work made up of five parts. Casa Radio Publishing House released a few days ago a CD edited by Casa Radio, which contains, among others, an older recording of this work that I made, a daring music, a very modern music, which depicts a twenty-three years old Lipatti, who is able to master some extremely evolved compositional means.

As you are an important initiator of Dinu Lipatti's art, I would like to ask you which are the steps that should be followed from now on, after this year of the centenary, when we have had quite a lot of events dedicated to him, to keep alive the name of this great musician?

There are still many things to do. First of all, we should promote assiduously Dinu Lipatti's musical compositions and also, take care of the promotion of these works in concert life. The deep artistic message in his compositions shows that for Lipatti composition was also an important vocation. We should listen to his recordings, we should take care of his house in Bucharest, in other words, we should keep alive this flame, because Lipatti is, along with George Enescu, a veritable country brand and I hope that more musicians and colleagues who have a leading position understand fully this fact.