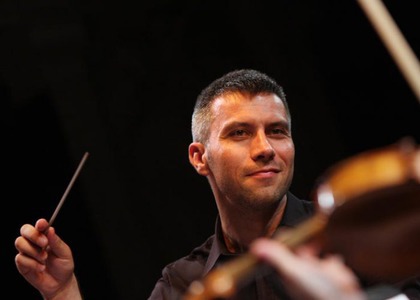 On January 8th, 2018, starting from 19.00, at the "Ion Luca Caragiale" National Theatre, the Symphactory Orchestra will perform the New Year's Eve concert for the fifth year in a row. The orchestra will be conducted by Tiberiu Soare, this week's guest at Perpetuum Mobile.

We have invited Tiberiu Soare to join us in the Perpettum Mobile via phone. The main reason is the New Year's Eve Concert he will conduct at the beginning of 2018.

Hello! Please tell us something about this event.

Hello! It is a concert that aims to bring a drop of beauty in this - unfortunately - increasingly disunited world we live in. As you your listeners certainly know, music brings people together and on the evening of January 8 in the Great Hall of the Bucharest National Theatre we are trying to offer the audience from Bucharest and other places a drop of beauty and peace. It is a concert with the Symphactory Orchestra - short for Symphonic Factory. The name started off as a pun. It is an orchestra supported from private funding, an initiative of the young Romanian musicians in Bucharest. The guest of the Symphactory Orchestra will be soloist Manrico Padovani, a Swiss violinist of Italian origin, born in Switzerland in an Italian family, a remarkable musician. I hope the audience will fully acknowledge this on the 8th. In the opening act, Manrico Padovani will perform the Concerto no. 1 in D major for violin and orchestra by Niccolò Paganini and after the break we will offer the audience two suites comprised of the most important and beautiful moments in Georges Bizet's Carmen.

So it's a New Year's Eve concert that doesn't follow the standard program of the one in Vienna.

We specifically avoided a standard program. The waltz is king, of course, especially at the beginning of the year. Everyone knows this extraordinary tradition established by the New Year's Eve concert in Vienna, where the waltz is the master of the repertoire, alongside, of course, other compositions such as polkas or mazurkas. Again, we aim to offer that moment of beauty that is very necessary, I think, for each and every one of us at the beginning of 2018. The model is Western, of course, the organizing of a concert close to or immediately after New Year's Eve, but we didn't want to make it a copy of the Vienna concert, but rather a concert in its own right and in our own style. In fact, the young Symphactory orchestra has always done things the way they should be done, on a very high artistic level, but a bit different than usual and I think that, in the end, this is what defines style.

I can't help but notice that in February 2018 the Symphactory Orchestra will reach six years of activity. How can you describe the ensemble now?

It is very dynamic. I have to confess that, apart from a core that hasn't changed since the beginning, the roster keeps changing and this is perfectly natural, because there are many of us that are focused on the activity of young people. We are very interested in seniors at the Conservatory - instrument players, of course -, others that have graduated from the Conservatory but still haven't gone into the work market, which unfortunately is quite a difficult thing to do these times. We are trying to offer opportunities to all young people that want to play in an orchestra and want to learn what playing in an orchestra means.

Since 2017 is soon coming at an end, how would you rate this year for you as an artist?

It was a pretty good year. I'm very happy that I had the opportunity to conduct the premier of the ballet Romeo and Juliet by Sergei Prokofiev, choreographed by Renato Zanella, on the stage of the Bucharest National Opera. I'm very happy that I was able to do what I love - conducting - both in Romania and abroad, where I was invited. It was a good year. It's a beautiful year and, from here on end, I hope everything will go better and better.

I can't help but ask you, for the listeners of Radio Romania Music: what are your artistic plans in the more or less near future?

Obviously, all my plans are strongly tied to the concerts where I have to conduct or to the Bucharest Opera Orchestra, but there are also invitations, concerts, contracts… I would also like to honor my place as a conductor at the Bucharest National Opera and to teach. Starting this year, I teach conducting as an associate professor with the Bucharest National University of Music. I have to freshmen that I want to help grow with the utmost care. So there are only beautiful things. On a professional level, I really can't say that I will get bored or something of that nature. We musicians think the most about the audience and we hope we'll be able to offer them as many beautiful moments as possible. Since I've mentioned the people in the Symphactory Orchestra, I absolutely have to thank the Calea Victoriei Foundation. It's a foundation whose CEO is Sandra Ecobescu. They've just turned ten. I am among the lecturers collaborating with the foundation and I'm very proud about it. I also have to thank the people from the Bucharest National Theatre, who were extremely receptive at our desire to find a space where we could offer the audience a concert on the evening of January 8, 2018.

So - January 8, 2018, a New Year's Eve Concert with the Symphactory Orchestra under the baton of Tiberiu Soare. What invitation would you like to address to those who love music?

Dear music lovers, come and enjoy something beautiful, come and appreciate the truly important things that can come into your life: the joy of being together, the joy of stepping into a new year together! And what better way to do it than through music - music that unites and soothes the soul!