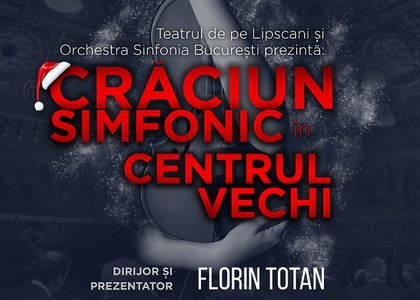 Maestro Florin Totan, you have many concerts this period, many events, the public can see you in different places, but first and foremost you will offer us a Symphonic Christmas on December 21st in the Old Town. How does this period look for you?

It was indeed a very rich month of December. Santa must have seen that this year we've done several cultural deeds and as a present he gave me five Christmas concerts. There were three Christmas concerts at the National Opera and Ballet Theatre in Constanţa, honoring the invitation of general manager Daniela Vlădescu. It's very interesting because there is a mutual admiration between us, but this time she simply told me "Florin, you're on the guest list! Please come to these concerts because the people want you!" So the audience in Constanța - given the fact that in September I opened the concert season in their city - asked for Florin Totan thanks to the cultural approach he promotes in his concerts. It is this cultural approach that I will be promoting during the concert on Thursday, December 21st, at the Lipscani Theatre. Another prestigious concert inserted itself between the first three and the one at the Lipscani Theatre, this time at the invitation of the Romanian National Bank. We will perform a Christmas symphonic concert at RNB, just like we did a few years ago. On Wednesday, December 20th, my private orchestra - the Bucharest Sinfonia - and yours truly will give a private concert at the Romania National Bank.

Coming back to your question, I would like to invite all the people in Bucharest to the concert on Thursday 21st, starting from19.30, music lovers or not, because that is what my cultural product is about. I want to bring all these people in the concert hall, at events that require common sense and respect. I will speak as usual. There will be information from all fields of interest - music, philosophy, literature, from the great orthodox fathers and so on. I realized that all over the country, from Bucharest to Baia Mare, from Iaşi to Râmnicu Vâlcea and Constanţa, people are happy during these concerts because they need information, since today nobody reads anymore. My concept is an appeal to culture, and especially to reading. Culture sounds too fancy. I advise people to go back to the redeeming act of reading and let go of the - as I like to put it - addictive phones and Facebook.

What musical surprises can we expect in this concert? Purely musical.

My concert has two levels: a "popular" one and one that I would like to develop in the future, which will involve starting any concert with a certain topic. The popular level involves offering the audience a sort of music history in 90 minutes, starting with Mozart - the musical Christ for me too, not only for Tchaikovsky, he is my musical and spiritual Zeus - and moving on to the Hora staccato, to Shostakovich's famous waltz and to the Waves of the Danube. So, basically, what people would usually expect during these Christmas days and, starting with the next year, I hope I'll be able to start working systematically and thematically on this cultural product. I say systematically because this concert will have a certain rhythm, a certain cycle - perhaps every month or month and a half - and thematically because it will be focused on one composer and so on. There is a lot to say.

I would like to wish a Merry and Blessed Christmas to all the listeners of your prestigious music radio! God bless!